Bizarre Pontiac Trans Am Kammback concept up for auction 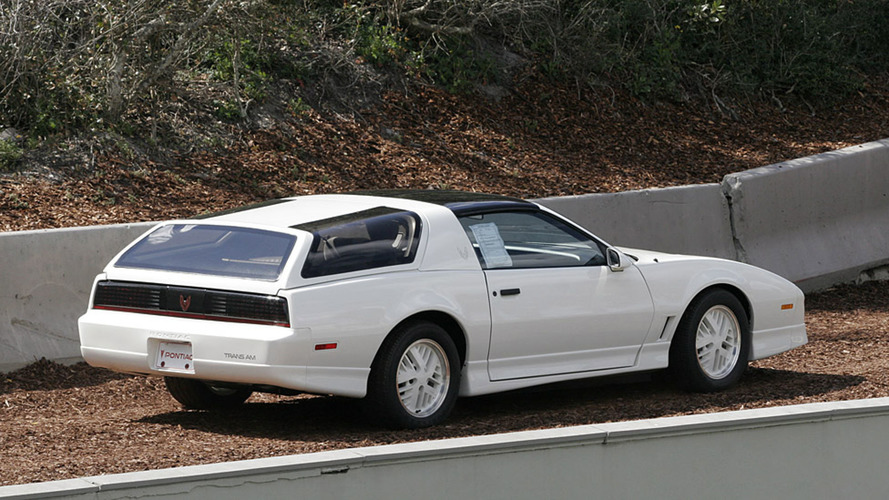 This would have been the perfect shooting brake for the '80s.

Muscle cars are a ton of fun, but their driver-focused design generally doesn’t offer much utility. General Motors imagined tackling this weakness in 1985 by creating the Pontiac Firebird Trans Am Kammback concept that combined V8 grunt with a longer roof. The project never came to fruition, but one of the test mules has now turned up on the consignment list for Barrett Jackson’s 2017 sale in Scottsdale, Arizona, from January 14-22.

According to the auction listing, the long-roof Trans Am concept packs a high-output 305-cubic-inch (5.0-liter) V8 and five-speed manual gearbox. By 1985 standards, the car is also full of features, including air conditioning, power windows, power locks, cruise control, and tilting steering wheel. A Dove Gray leather interior complements the white exterior and wheels.

The Kammback takes its name from German engineer Wunibald Kamm. The design features a rear that abruptly cuts off to a flat tail that reduces drag. It can allow for higher top speeds and better fuel economy – plus extra cargo space. GM was apparently quite serious about implementing this design for the Trans Am because this specific example was also the pace car PPG and IMSA Race Series for during the 1985 series.

While the vehicle never went into production, GM kept the test mules. In 1998, Detroit-based Pontiac dealer acquired this one and restored it. This auction includes a three-ring binder detailing the Trans Am Kammback’s history, and a letter from Pontiac Historical Services with more info about the car. Since this is an original concept, the vehicle comes with a bill of sale, not a title. Unfortunately, that makes the Kammback practically impossible to license for the road.

The Kammback has shown up at auction before. In 2007, RM Sothebys sold one with the same VIN number for $66,000. However, that sale showed the car as having a four-speed manual gearbox, whereas Barrett Jackson has listed it as a five-speed. RM also sold an example for $35,200 in 2010. The upcoming auction will have no reserve, so we’ll be curious to see where the price will fall this time.

Description
Lot #1245 - This is a genuine former General Motors test-platform mule, VIN 0000EX4796, equipped with G-code HO V8 with 5-speed manual transmission, factory air, power steering, power brakes, power windows, power door locks, cruise, tilt, AM/FM stereo cassette, glass T-tops and Pontiac T/A mag wheels. It has been extensively shown and promoted at auto shows as well as in magazines. EX4796 was put into service as a Pace Car for the PPG and IMSA Race Series for 1985 with a roof-mount light bar and two-way communications equipment. The Kammback Concept failed to advance after 1985; however, this car was stored at GM for 13 years in the Pontiac Engineering Car Collection until a local Detroit-area Pontiac dealer and collector, John McMullen, was able to acquire it.

Experimental cars normally go to the crusher, but this one, by the good graces of Pontiac, escaped and has survived. While in the McMullen Collection, this car was professionally restored in meticulous detail, right down to the undercarriage white floor pans, after which it was sold to the John O'Quinn Collection in 2007. The white exterior is graced by Dove Gray leather interior trim and is in outstanding condition, as is the engine compartment and undercarriage. The Kammback Concept has been editorialized by Motor Trend magazine with a cover and multi-page spread in June 1977 and August 1985. A 3-ring binder documents this car's history in the McMullen Collection, the John O'Quinn Collection and Scott Tiemann's Supercar Specialties. Also included is a letter from Pontiac Historical Services (PHS) that further documents this car, its story and history. Recent credits include 2015 Concours d'Elegance of America and the November 2015 Muscle Car and Corvette National Show in Chicago.