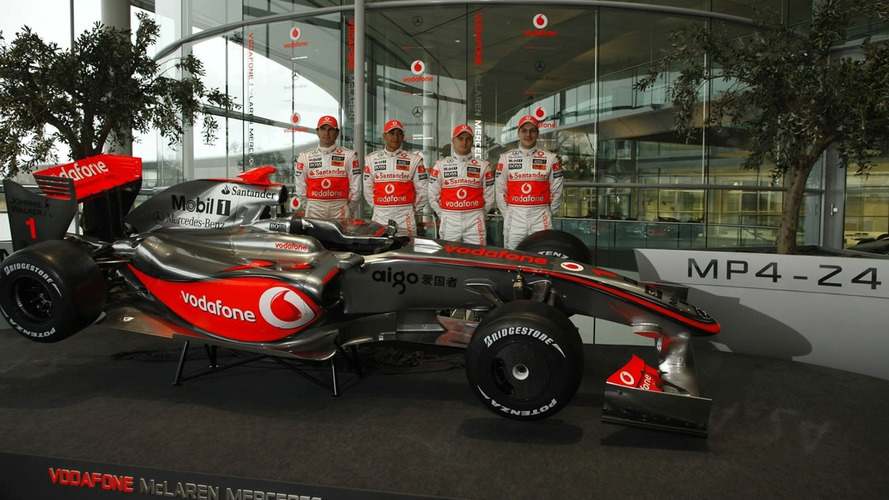 McLaren-Mercedes have unveiled their new MP4-24 car for the 2009 F1 season just a few days after arch rivals Ferrari and Toyota unveiled their own versions.

McLaren-Mercedes have unveiled their new MP4-24 car for the 2009 F1 season just a few days after arch rivals Ferrari and Toyota unveiled their own versions. Ron Dennis also used the occasion to announce he will step down as team principal as of March 1st with the reigns set to be handed over to his long time deputy Martin Whitmarsh.

Dennis has insisted the decision is 100% his own. He is stopping short of full retirement to remain as executive chairman, focusing his attention on the production models the company has under development.

Due to the new rules and regulations that will come into force when the new season kicks off at the Australian Grand Prix, the MP4-24 is a far cry from last year's championship winning challenger.

The front wing is much wider whilst the rear wing is more compact. It gives the MP4-24 a weight distribution that is more biased towards the front enhancing the possibilities of overtaking when following another car. Other aerodynamic modifications include the banning of ancillary appendages, the addition of driver-adjustable front-wing flaps and a heavily revised diffuser.

In a collaboration with engine partner Mercedes, the new McLaren also features the new KERS (Kinetic Enrgy Recovery System) device which harnesses the energy generated from the braking system and stores it in super-capacitor batteries. This generates an additional 80bhp (60kW) of power and will help reduce lap times by up to 0.6 seconds.