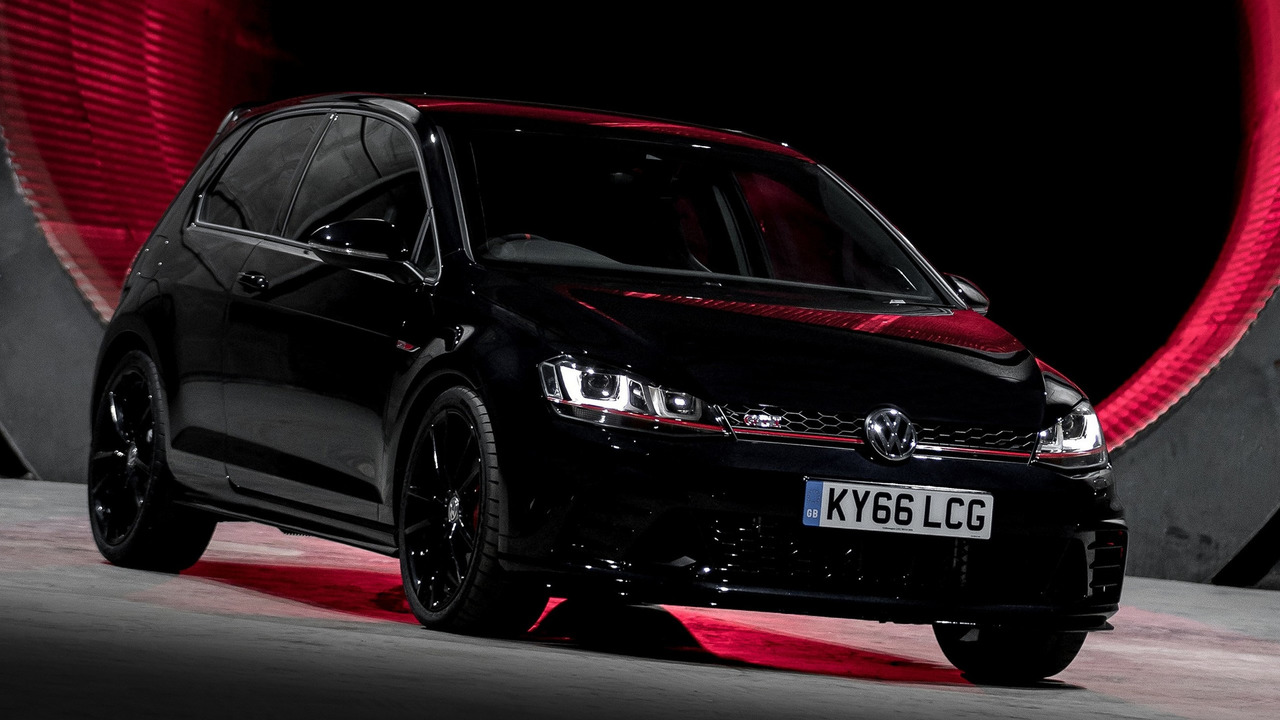 Created to mark four decades of the Golf GTI, the special edition packs numerous upgrades both inside and out.

Even though it’s now 40 years old, the Golf GTI is not going through a midlife crisis as it’s in a better shape than ever. To mark the hot hatch’s milestone, VW introduced this year the Clubsport Edition 40 special edition available in select markets, including in U.K. where the 1,000 allocated units were sold within weeks at £30,875 a pop. The peeps from Wolfsburg are now sharing a fresh batch of images with the latest special edition Golf GTI featuring a slightly more aggressive body and bespoke 18-inch wheels.

It looks quite sinister in the all-black attire and that menacing exterior is matched underneath the hood by the upgraded turbocharged 2.0-liter engine pushing out 265 horsepower. Ideal while overtaking, the engine has an overboost function that will dial the output to 290 hp for ten seconds. To please both worlds, VW offered the limited-run Golf GTI with a six-speed manual gearbox and a six-speed DSG, both of which enabled the performance hatch reach 62 mph (100 kph) in a brisk 6.3 seconds before hitting 155 mph (250 kph).

Besides the Clubsport Edition 40, VW had an even more hardcore version of the Golf GTI. Pictured above, the Clubsport S with its meaty 310-hp engine is the fastest front-wheel-drive production car on the Nürburgring after lapping the Green Hell in 7 minutes and 47.19 seconds on October 26. It’s improvement of the previous record established earlier this year by the same model with a time of 7 minutes and 49.21 seconds.

Aside from being quicker and way more powerful than the Clubsport Edition 40, the Clubsport S was also considerably more exclusive as VW capped production at just 400 units, with 100 cars heading to Germany and 150 units to U.K. As you would imagine, the car has long been sold out. Capable of doing the sprint in just 5.8 seconds and maxing out at 164 mph (264 kph), it doesn’t come as a surprise the special edition was an instant hit.

As a final note, the latest incarnation of the Golf Gran Turismo Injection is the facelifted version featuring 230 hp as standard and 245 hp in the spicier GTI Performance flavor.

40 YEARS OF GOLF GTI: 12 MONTHS OF RECORDS AND CELEBRATIONS

As 2016 winds to a close Volkswagen in the UK is looking back on 12 months of celebrations, records and record-breaking interest in one of the brand’s genuine automotive icons: the Golf GTI.

40 years ago a small group of German engineers, managers and, above all, motoring enthusiasts came together to create what was quickly to become a motoring phenomenon – the original Golf GTI.

Former Communications Director at Volkswagen, Anton Konrad, along with Hermann Hablitzl, head of Golf project development at the time; Herbert Schuster, a chassis expert who would later become a member of the board responsible for development; Jürgen Adler, a specialist in interior design; and Horst-Dieter Schwittlinsky from marketing were the originators of the GTI.  They were later joined by Gunther Kühl from motorsport and engineer Alfons Löwenberg as they crafted the GTI unofficially and, essentially, in secret.

Initially engineered as an enthusiast project, it soon became clear after the first Golf GTI hit showrooms in 1976 that the brand’s initial predictions of 5,000 sales might have been somewhat conservative.  Today – seven generations and more than two million sales later – the Golf GTI still engenders avid interest from enthusiast owners, and would-be owners, around the world.

The UK, long a hotbed for hot hatch appreciation, took the GTI to its automotive heart early and has remained true to this special Volkswagen for four decades.  Indeed when the Golf GTI Clubsport S project was announced earlier this year Volkswagen UK took the bold decision to ring-fence no fewer than 150 of the 400-run limited edition GTI celebration models for its Retailers here, making the UK the world’s single biggest market for the ‘ultimate’ Golf GTI.

It was a decision that was soon vindicated as the Clubsport S sold out to eager buyers nationwide even before its £33,995 RRP price tag was officially announced in August.  The Clubsport S is, currently, the ultimate expression of the GTI bloodline.  The front-wheel-drive car’s 2.0-litre TSI engine packs 310 PS, enabling a blistering 7m 47.19 s record lap time around the infamous ‘green hell’ of the gruelling Nürburgring Nordschleife and a top speed, where legal, of 164 mph.

Those who missed out on the Clubsport S here though might perhaps have been tempted by the brand’s GTI Clubsport Edition 40 – 1,000 of which were offered to UK drivers in 2016.  Powering this latest special edition in the GTI range is a 2.0-litre turbocharged direct-injection engine that delivers 265 PS, with an additional ‘overboost’ function increasing the engine power to 290 PS for up to ten seconds under intense acceleration.

Priced from £30,875 (RRP OTR) the GTI Clubsport Edition 40 features a host of bespoke additions and enhancements to mark it out as a potential future classic and, like its extreme, track-honed cousin the Clubsport S, it also sold out within weeks of arriving in Retailer showrooms.

In the UK, a series of events has been held to celebrate the GTI’s enduring appeal.  Among the highlights, an eclectic mix of Volkswagen Golf GTIs from across the model’s remarkable 40-year history journeyed to Volkswagen UK’s headquarters in Milton Keynes on Saturday, 20 August, to attend a special ‘birthday celebration’ for the iconic hot hatch.

The unique event, organised in association with the UK’s largest online motoring forum – PistonHeads.com – saw the owners of 85 GTIs from across the years make the pilgrimage to the cars’ spiritual home in Britain – the headquarters of Volkswagen UK in Milton Keynes.

Internationally, the 35th Wörthersee Meet in Austria saw tens of thousands of GTI fans travel to the picturesque Reifnitz on the southern shore of Lake Wörthersee for a gigantic party to celebrate the 40th birthday of the cult hot hatch.  Volkswagen took all seven generations of the Golf GTI along, as well as the Clubsport and Clubsport S for Volkswagen enthusiasts to admire.

While Volkswagen’s Golf Gran Turismo Injection has evolved significantly from its earliest iteration – the 0-62 mph acceleration time of the original 1976 car, at 9.2 seconds, is eclipsed significantly by the Clubsport S’s 5.8 seconds for instance – the sporting ethos and commitment to everyday driving fun remains true to that of the original.

With a new Golf GTI due to debut in 2017 boasting more power, enhanced technology, refreshed styling and more equipment than ever before the future looks bright, too, for one of Volkswagen’s true icons.