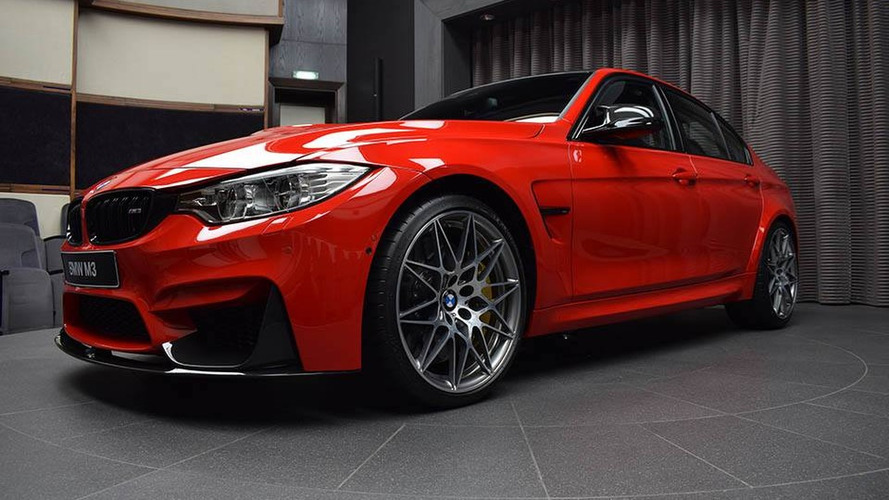 From the Individual paint to the Competition Package, this M3 has basically all the equipment you could ever want.

After bringing together a sextuplet of colorful i8s, BMW Abu Dhabi has another special treat for fans of the Bavarian marque. The UAE-based dealer has on display what is likely one of the most expensive new M3s out there. Far from being a stock version, the performance sedan wears an optional Ferrari Red paint from the Individual catalog and is also fitted with the Competition Package, so the turbocharged straight-six engine with a 3.0-liter displacement pumps out 450 horsepower (335 kilowatts) and 405 pound-feet (550 Newton-meters) of torque.

The optional Competition Package also bundles an updated chassis featuring recalibrated springs, dampers, and anti-roll bars, while the Active M Differential and the lightweight M-branded sports seats are also part of the deal. This particular car takes the level of upgrades up a notch as it has been fitted with carbon ceramic brakes, an adaptive M suspension, and an aerodynamic body kit bringing among others a carbon fiber trunk lid spoiler.

Besides the goodies created by BMW, the M3 also has some Akrapovic bits at the back where the carbon diffuser comes with four tips part of the tuner’s Evolution exhaust system.

As far as the interior is concerned, the predominately black look is combined with red accents noticeable on the stitching of those body-hugging seats and also on the dashboard and door panel trim.

On the performance front, this M3 fitted with the seven-speed, dual-clutch gearbox runs to 62 mph (100 kph) in just four seconds thanks to the Competition Package slashing a tenth of a second from the sprint.

Perhaps the only thing that’s missing is a rear wing, although that discreet spoiler does a good job at making the M3 look even more appealing than it does in stock form. As a reminder, BMW recently extended its M Performance portfolio with a plethora of new items, including a fixed rear wing dipped in carbon fiber and adorned with M side stripes for the M3 Sedan and the M4 Coupe.