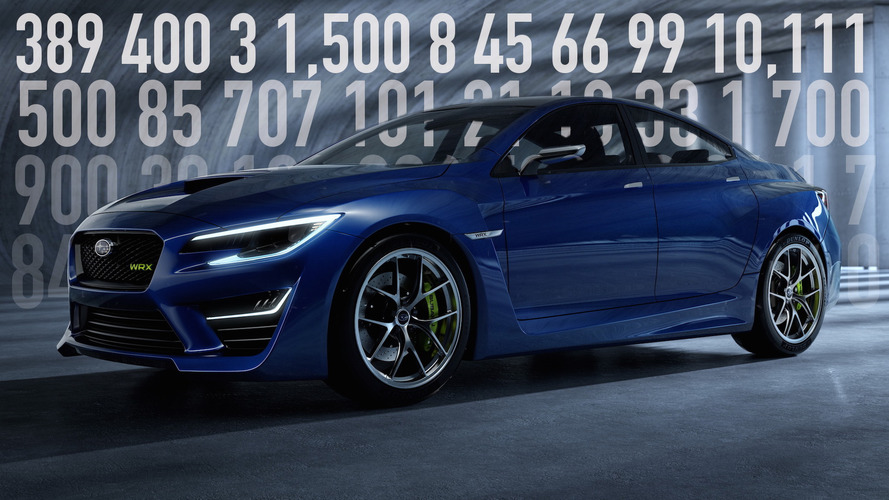 From Subaru to Faraday Future, take a look back at some of the most eye-catching numbers of the week.

Numbers are all around us – whether we're breaking down the performance of a Ferrari 488, or comparing the price of a Model S to a Mercedes. Every week we pick out a few numbers that are so significant we have to give them a second look. Today we’re looking at a sporty Subaru and a futuristic Faraday Future model.

Year until which we’ll have to wait for a new Subaru WRX. The current model was launched in 2015 and will be facelifted in 2018, reports suggest. But the 2020 WRX could make a huge leap forward and adopt a hybrid powertrain for the first time ever.

The price, in dollars, of Faraday Future’s forthcoming crossover. Apparently dubbed Project 91 internally, it’ll be the fledgling company’s halo model, priced way above what you’d pay for a Tesla Model S or X. Production of the $150,000-$200,00 Faraday Future vehicle is supposed to start in 2018.

Number of Honda Odyssey minivans recalled for problems with seat latches that could come loose in an accident. The primary recall concerns 634,000 units of the 2011-2016 Odyssey, while a separate one affects the 2016 Odyssey alone.

Amount of debt, in dollars, that Fiat Chrysler Automobiles is reported to be struggling with. That, according to some reports, could lead FCA to sell off the Alfa Romeo and Maserati brands in order to sort out its finances.

Kilometers on a Lamborghini Reventon’s odometer, equivalent to a paltry 1,000 miles. Powered by a 6.5-liter V12 and with absolutely killer supercar looks, this Reventon is expected to bring $1-$1.4 million when it goes up for auction in January – not bad for a ten-year-old car that started at about $1.5 million when new.