You could own the first functional Ford GT prototype 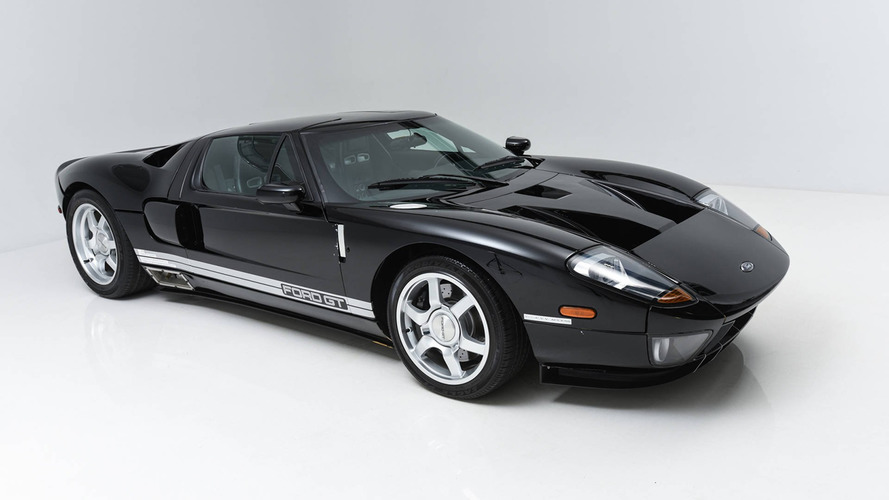 It’s heading to auction in January – but it won’t be cheap.

For about $400,000, Ford will sell you a brand new GT supercar… pending you get approval from Ford first. Production is said to be limited to just 250 examples per year. But what if you’re looking for something even more exclusive than that? Why not put your money down on this last-gen Ford GT prototype.

Ford GT Confirmation Prototype 1 (CP-1) is the first fully-functional prototype the company built leading up to production in 2005, and the first with a full interior. It was just the fourth example built overall – following three display models in 2003 – and wears the VIN 004.

Though it may look production ready, it still has a number of parts in tow that were used exclusively for testing. A "sniffer pipe," for example, was included for emissions testing, as was a carbon fiber clamshell that cost over $45,000, a quick-release fuel tank, a black supercharger and valve covers, and even the steering column off a Windstar minivan.

The cherry on top: it bears the signatures of 13 members of the original Ford GT design and development team, including the likes of Bill Ford, Chief Designer Camillo Pardo, and even Carroll Shelby himself. As cool as that all sounds, there is one minor catch. Considering the car was used exclusively for test and display purposes, its top speed is limited to – wait for it – a mind-boggling five miles per hour (eight kilometers per hour).

It was sold as is in 2008 by Ford to avid collector "GT Joey" Limongelli, who, quite literally, wrote the book on the Ford GT. And in January, it will cross the auction block for the first time as part of the Russo and Steele Arizona sale in Scottsdale. Though no price estimates have been given, GT prototype CP-2 sold for $800,000 this past summer in Monterey – meaning this one could go for a million or more.

irst shown in 2002 to celebrate Ford Motor Company’s upcoming centennial, the Ford GT40 concept car was designed by Camilo Pardo, the head of Ford’s “Living Legends” studio under the direction of Ford design chief J. Mays. Clearly inspired by the GT40s that beat Ferrari at Le Mans in 1966 and dominated there through 1969, the new-generation Ford GT was soon prepared, refined, and tested for production.

A true piece of automotive history, Ford GT prototype CP-1, short for Confirmation Prototype 1, was the first fully-functional Ford GT prototype built in 2003 as part of the all-new GT’s development phase. Assigned VIN 004, it was the first Ford GT prototype to be equipped with an engine, drivetrain, and full interior, in contrast to the red, white, and blue Ford Centennial prototypes which were non-runners for exhibition purposes only and currently reside in the Ford Museum. In 2008, CP-1 was purchased from Ford Motor Company by “GT Joey” Limongelli, the respected GT collector and author of “Ford GT 2005-2006: The Complete Owners Experience,” considered the definitive book on the reborn Ford GT.

In addition to its early provenance, the originality of CP-1 is perhaps what makes the car so tantalizing to hard-core Ford enthusiasts. Its body and engine compartment feature an array of non-standard components and many design features that are exclusive to this prototype, including the air bags, which are in fact Mustang components, and the steering column that was sourced from a Ford Windstar van. The silver trim rings on the seats were eliminated on production cars, the striking Camillo Pardo-designed all-aluminum headliner was replaced in production by a more traditional padded item, and a note scrawled in marker on the center console instructs test drivers to “push red button to start” the mid-mounted V-8 engine, which is mated to a 6-speed transaxle. Outside, the right quarter-panel features two quick-release valves connected to the fuel tank that allow quick changes of fuel grades. Extending beyond the rear bumper, a set of experimental exhaust pipes incorporate a “sniffer pipe” that allowed the engineers to determine engine emissions during testing.

Of further interest, the engine of CP-1 resides beneath a lightweight carbon-fiber rear clamshell. However, when Ford executives learned the projected cost of this item was projected to cost approximately $45,000 to produce, a more traditional and far less-costly aluminum unit replaced it. The engine of CP-1 is fitted with a black supercharger and valve covers, which were replaced in production by a silver blower and traditional Ford Blue valve covers. While CP-1 has a fully functional powertrain and the car has a 17-digit VIN, prior to the sale in 2008 Ford engineers installed a chip in the engine limiting its top speed to 5 mph for display use only. As offered, CP-1 is accompanied by factory Build Sheet documentation, and it retains the test connections and monitoring equipment used during the Ford GT’s road and emissions certification testing.

The vehicle is adorned by the autographs of 13 members of the original Ford GT design and development team including Bill Ford, GT Chief Designer Camillo Pardo, GT Chief Design Engineer Fred Goodnow, and even Carroll Shelby, who played a major role in the Ford GT testing and development program. A true motorsports and design landmark in every respect and an essential part of the Ford GT development and testing process, CP-1/VIN 004 stands as an incredible link bridging the original GT40 of the 1960s to the current Ford GT that took on the world’s best and won at the 2016 running of the 24 Hours of Le Mans. Truly historic as the first powered and fully functional Ford GT prototype, CP-1/VIN 004 offers an incredible opportunity at auction.

Experience all the high energy excitement of Russo and Steele in Scottsdale for yourself! Bidder registration is just $200 and includes admission for all 5 days of “Auction in the Round” action for the bidder and one lucky guest. Stay tuned for further updates on our 17th annual Scottsdale auction and event schedule and join us January 18-22 live from Salt River Fields at Talking Stick!

For Enthusiasts by Enthusiasts. ™   At Russo and Steele Collector Automobile Auctions, it’s far more than a tagline – it’s our lifestyle! To obtain further supporting documentation, high-resolution images, or more information about Russo and Steele and our upcoming Scottsdale, Arizona auction, please contact Darin Roberge at darin@russoandsteele.com.