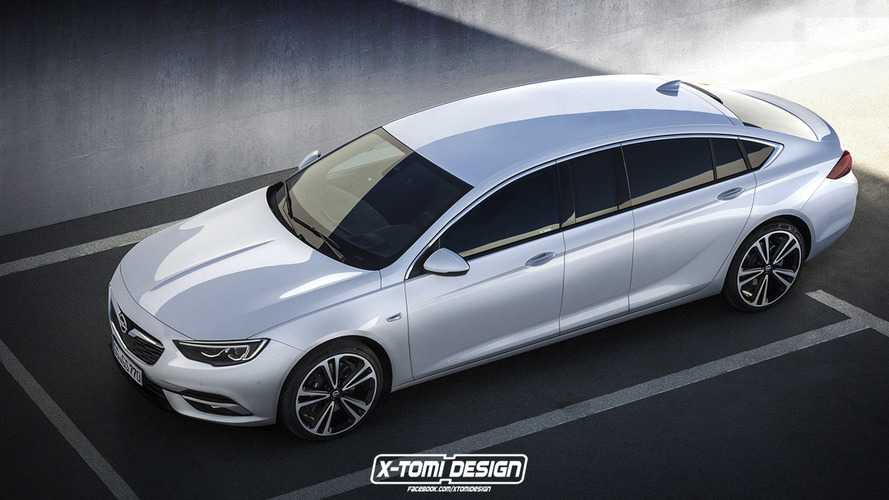 The new sedan looks pretty good with an extended wheelbase.

This is the longer, lovelier version of the Opel Insignia Grand Sport that may or may not actually happen. Similar to the Holden Commodore ute concept we featured just a few days ago, this Insignia Grand Sport limousine is just a rendering – but it’s an interesting, handsome proposal nonetheless.

Using all the same styling cues found on the standard sedan, this Insignia limo channels its inner Mercedes S-Class Pullman. It extends the rear significantly thanks to some added bodywork in the center, and tacks on some extra legroom in the rear, painting a more luxurious picture of the Opel overall.

But this isn’t the first time we’ve seen a proposed Opel Insignia limo. Back in 2009, limousine builder Wilcox introduced its own Opel-based limousine proposal with six doors, a more upscale interior, and a drastically extended wheelbase. Unfortunately, that concept never came to fruition.

Limo or no limo, the new Opel Insignia Grand Sport is still the most luxurious-looking sedan the company has ever built. A heavily-revised front fascia gives way to a smoother set of body lines and a more sculpted rear. Already we’ve seen the new Opel rendered in coupe and OPC trim – both of which are expected to debut sometime in 2017.

Thankfully, all that added luxury should be helped out by a range of newer, more powerful engines. The base Insignia Grand Sport will feature both a 1.5-liter gasoline engine that will produce 163 horsepower (121 kilowatts), and a 2.0-liter unit that will produce 247-horsepower (184-kilowatt). The hotted-up OPC variant – which is expected to arrive sometime in 2017 – will put to use the same 2.0-liter four-cylinder engine, with the ability to push out well over 320 horsepower (238 kilowatts).