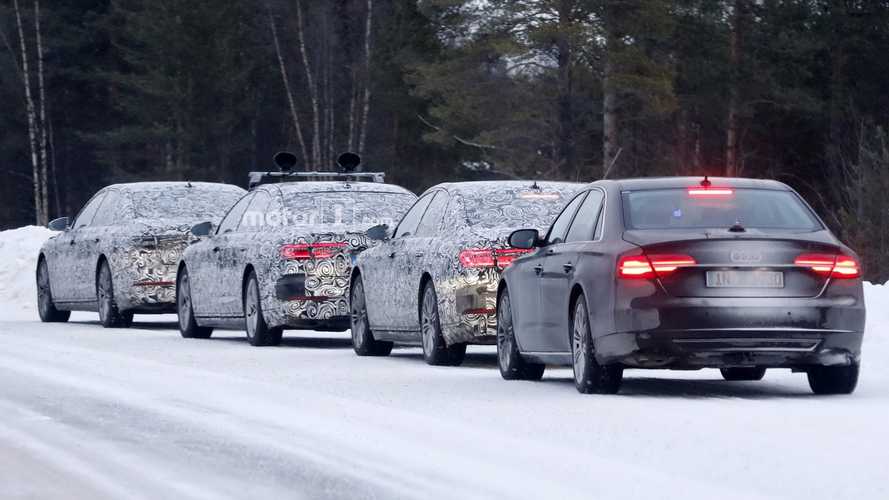 Ingolstadt's flagship is currently undergoing final testing ahead of next year's launch when it will take on the 7 Series, S-Class facelift, and next-gen LS.

With the all-new Lexus LS scheduled to go official next month in Detroit, it means the current A8 will become the oldest model in the fullsize luxury sedan segment. The good news is Audi is currently putting the finishing touches on its next-gen range topper spotted here as part of a three-car convoy escorted by an outgoing A8.

Despite the swirly camouflage, we are able to notice the cars had the production bodies expected to resemble the stylish Prologue concept revealed a little over two years ago. According to our spies, there aren’t going to be any big changes in terms of size, but we are expecting a slightly longer wheelbase to free up more space for rear passengers. The next A8 along with the new A7 and A6 are going to be the first Audis designed from the ground up by Marc Lichte and his team. Replacing Wolfgang Egger, Lichte has made the promise to herald a new design language for the brand and the three models at the top of the range will lead the way.

From what we are seeing so far, the A8 (D5) won’t be a significant departure compared to the aging D4 pictured above, but already we are able to spot a new take on the singleframe front grille and wider taillights. A slightly more inclined roofline towards the rear is also noticeable, while the camo on the rear door windows and the fabric on the dashboard hides the interior.

Speaking of which, the cabin will be a significant departure over the current car since it will reportedly utilize a new infotainment system with gesture control and an OLED screen. An entirely digital instrument cluster will likely come as standard, and at an additional cost buyers will have the option of ordering an advanced traffic-jam pilot system allowing the A8 to drive itself at speeds of up to 37 mph (60 kph).

Riding on the same MLB Evo platform as the second-gen Q7, the overhauled A8 is expected to shave off a significant amount of weight, with some saying it’s bound to go through a drastic 441-pound (200-kg) diet. Even if it won’t lose so much fat, the fullsize posh sedan is hitting the gym hard and that will bring benefits in terms of efficiency and performance.

Since we’re on the subject of performance, Volkswagen Group’s new biturbo W12 6.0-liter from the Bentley Bentayga will find its way underneath the hood, as will a biturbo 4.0-liter V8 for the hot S8 pictured above. The latter has already been caught on camera and is expected to utilize the 2017 Porsche Panamera Turbo’s mill. With VAG’s promised green push, at least one plug-in hybrid derivative is likely on the agenda.

Audi has confirmed the new A8 is going to be introduced in 2017, but without announcing an exact date and the venue where it will host the premiere. Chances are it will be unveiled on its home turf in September at the Frankfurt Motor Show, with sales to kick off by the year’s end or the beginning of 2018.