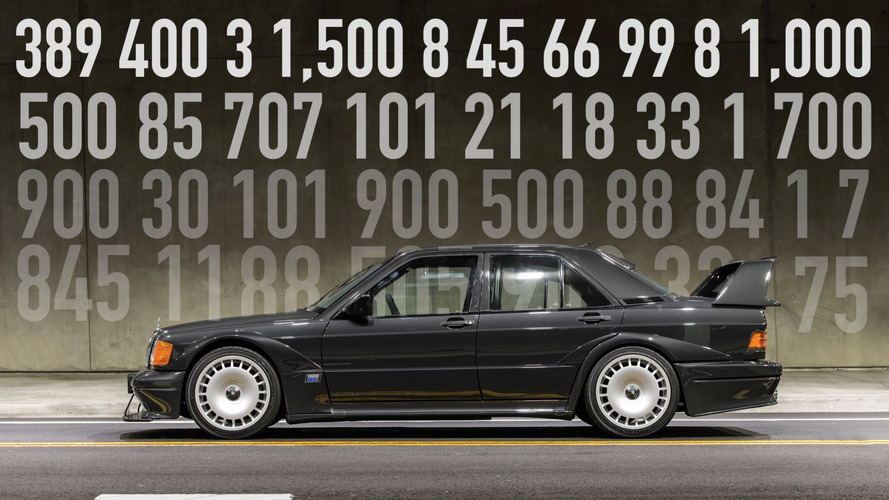 From Mercedes to Lamborghini, take a look back at some of the most eye-catching numbers of the week.

Numbers are all around us – whether we're breaking down the performance of a Ferrari 488, or comparing the price of a Model S to a Mercedes. Every week we pick out a few numbers that are so significant we have to give them a second look. Today we’re looking at a classic Mercedes, a Lamborghini Aventador, and a very rare Buick.

Distance, in miles, covered by this gorgeously preserved Mercedes 190 E. This example of the high-performance sedan, which was first introduced at the 1990 Geneva Auto Show and served as a counterpunch to the contemporary BMW M3, is up for auction in January. Adding to its prestige is the fact that it was the first 190 Evolution II version of the car ever to be offered for sale in the U.S.

Number of horsepower from the massaged V12 engine in the Lamborghini Aventador S. As if that wasn’t enough of a change for the raging bull, the Aventador S also gets rear-wheel steering, a lighter exhaust, and a new diffuser to improve downforce. All told, it’s enough to run to 62 mph (100 kph) in as little as 2.9 seconds and max out at 217 mph (350 kph).

That’s the total number of cars that Honda has built globally since 1963. That’s an impressive figure in just a little over half a century, and is a testament to the fact that Honda now has 34 factories cranking out vehicles on five continents all over the world. The first two models to roll out way back in 1963 were the T360 mini-truck and, soon after, the S600 roadster.

Amount, in dollars, that organizers of an upcoming auction say a Buick GNX could sell for. Of course, all versions of the GNX, a hotted-up muscle car with a turbocharged V6 engine, are valuable, but this particular one is even more special than usual. It’s the very last GNX ever built, number 547 or 547, and it has just 68 miles on its odometer. Find out how much it sells for next month.