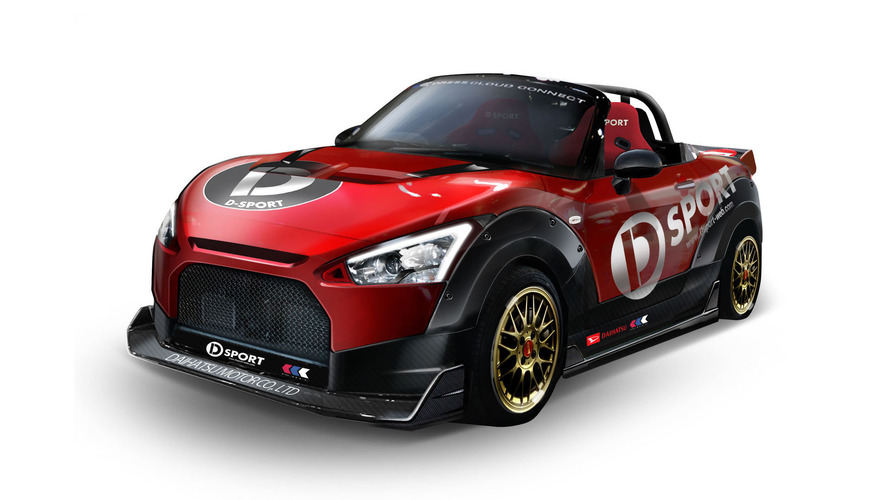 From the Copen to the Canbus, virtually the entire lineup will be on display.

Japan will open its doors to the Tokyo Auto Salon on January 14, 2017. It’s essentially the Japanese equivalent of SEMA, and like any good aftermarket auto show, manufacturers are pulling out all the stops to put their most ridiculous cars on display. Already we've seen teasers from Honda and Mazda.

But further adding to the fracas, Daihatsu, will have 11 of its cars on display for all to see. The company is splitting up its display into four different categories – Sporza, Grand Custom, Beach Cruisin’, and Cross Field. Each one will feature heavily-modified versions of some of its most adorable offerings.

First up is the Sporza series. Highlighted by a red exterior finish, bolted on fenders, gold wheels, and a roll cage, it’s the most aggressive the lineup has ever looked. The Copen convertible, Boon hatchback, Thor, and Move Canbus mini-wagons will all follow the same theme – red on black with gold wheels.

As for the Grand Custom series, the Thor, Tanto, and Move will get a more futuristic look with dark grey and black exterior finishes, and light blue accents to the wheels, grille, and fog lamps. The Beach Cruisin’ series will be less futuristic and more family friendly, with light blue and wood accents added to the Canbus and Boon.

Last, but certainly not least, the adventurous Cross Field series, which will see the Cast Active and Wake add on a few rugged enhancements. A forest green exterior with orange and camouflage accents are emphasized by a new set of black wheels.

All 11 cars will be on display when the Tokyo Auto Salon opens its doors in January.

The Daihatsu booth exhibited concept cars in four categories with the theme of "more fun. More yourself." Da Hatsu made the concept car that sublimated to a new form while taking the characteristic of the unique vehicle that Daihatsu has created and the conventional custom grade etc. as a base idea.

[SPORZA]
Daihatsu yesteryear hot hatch "Charade De Tomaso" and "TR-XX" an element of, resurrected as a modern specification
with red × black gold aluminum wheels of a dedicated body color, produce a high-quality sports taste
and individuality Daihatsu sports concept car to evoke the restart of the lineup that stand out in the

[Beach Cruisin ']
, dedicated body color and propose a new form of taste system in the original wrapping
loosely the life style, laid-back, representing the car to enjoy the slow

[CROSS FIELD]
dedicated body color finished in mat original D wrapping such as adding the active sense of
representing a single favorite is, outside the play "adult hobbyists" is to broaden the field of play