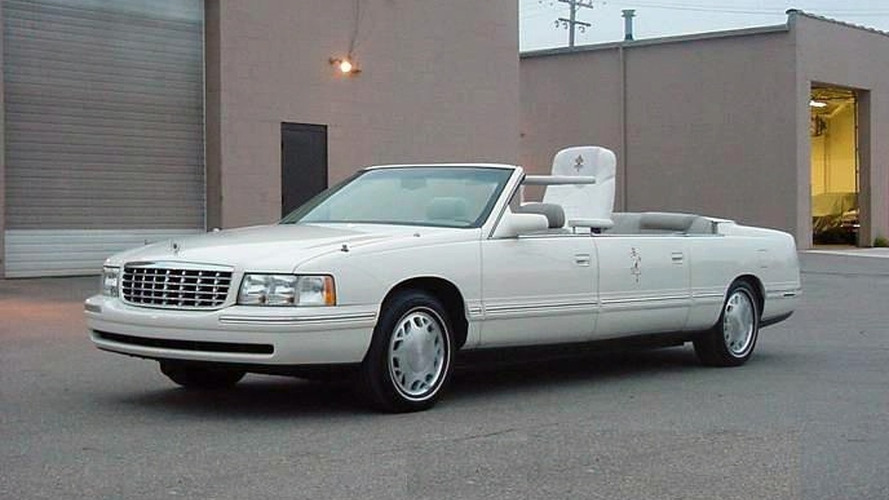 General Motors is putting 200 of their classic and collectible cars up for auction this week at annual Barrett-Jackson Auction in Scottsdale, Arizona. The company, which is said to own over 1,000 rare and historic cars, is trying to free up cash from wherever they can.

Amongst the 200 cars GM is selling is a one-off, white, stretch Cadillac DeVille built for Pope John Paul II. The Pope rode in the vehicle one time, taking a lap around the Mexico City Estadio Azteca when he visited the capital in January 1999. The Caddy comes with a plush chair that is raised up over the rest of the vehicle with hydraulics. Although blessed with holy water by the Pope, it was "deemed unsafe by the security team," according to the Arizona Republic.

Remember the Buick Blackhawk? You can purchase that beauty at the auction, too. The 2+2 concept convertible was built to celebrate the company's 100-year anniversary. It has a 1930's era grille, 1940's era body, retractable hardtop, and hidden headlights. It moves around thanks to a 1970 7.5-liter Buick GS Stage III V8, giving off 463 hp and 510 ft-lb of torque. The mean-but-classy car goes 0-60mph in under five seconds. Roof and frame are carbon-fiber, 18" wheels are five-spoke allooys, and the whole vehicle is handmade.

GM already got rid of their 1925 House Car, an early attempt at an RV with maple floors and mahogany trim, for $112,000 on the first day of the auction.

In addition to the cars, GM is also selling a few of their rolling chassis. These include a 2008 Chevrolet Corvette ZR-1, a 2004 GM Kappa (the basis of the Pontiac Solstice and Saturn Sky), and the original backbone to a 1931 Oldsmobile.

All total, the GM collection is expected to raise about $5 million. This will likely not help all too much, since lately they had been losing about $1 billion per month. GM has also donated vehicles for the charity auction. One of these is the first production 2010 Chevrolet Camaro.

Four Don Yenko-customized GM vehicles will also be for sale, including three of his 1969 Chevy Camaros, a 1981 Turbo Z Camaro, and a very rare Yenko-modified Nova. Other cool vehicles being sold include the first ever Ford Thunderbird, and the first 2010 Shelby GT500 Mustang.