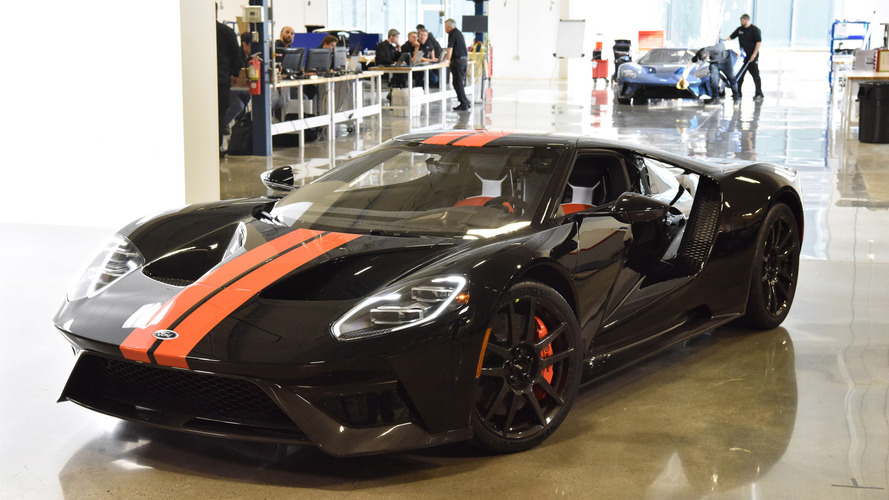 Bill Ford, Jr., and Mark Fields get the first and second GTs.

The first next-gen Ford GT just rolled off the line at Multimatic, an automotive company just a few miles outside Toronto, Ontario, Canada, and Motor1 was invited to attend that Job 1 event recently. It was proof positive that the street-legal GT is alive and well, and although the first three years of vehicles have already been spoken for, people will have a chance - a very slight one - to own the supercar in 2020.

According to Raj Nair, Ford executive vice president, global product development, nearly 90 percent of the initial customers chosen for ownership were in possession of a previous-generation GT. That clearly didn't make the thousands of other applicants (yes - an application was required to show interest) happy.

Around 80 employees at Multimatic are building the GT from start to finish at the Markham, Ontario facility.

But while the first three years are long sold by now, the fourth - and possibly last - year of production of the second-gen GT is dedicated to new owners. Ford is still being plenty secretive regarding the price of the supercar, but representatives say it'll be comparable to the price of a Lamborghini Aventador, which starts at around $400,000 in United States this year.

What this means is that while the coupe is undoubtedly very real, the chances of getting one are still beyond slim. You'll need to pass a very stringent application process, and have close to half a million dollars before you can park one in the driveway of your third house in Monaco.

You could also just be a really high-ranking employee at Ford, too. In fact, that'll move you to the front of the line - the very first GT is going to the company's executive chairman Bill Ford Jr., and the second to Mark Fields, who is Ford Motor's president and chief executive officer.

Around 80 employees at Multimatic are building the GT from start to finish at the Markham, Ontario, facility. We had a chance to see those employees at work on the GT - a supercar that requires approximately 6,000 parts to be assembled before completion. It's certainly a very different experience than at a facility buzzing with machinery and people, but that's to be expected when you're talking about a car that's this exclusive.

We learn that a fully-painted roof is attached to the GT very early in the assembly process (since the roof is such an integral part of how the vehicle performs), and even spy a tiny trunk located behind the driver. That's likely something most people would only notice when the car is being built, because when it comes to the gorgeous finished product, the eyes tend to wander to the upward-swinging doors, the gorgeous headlights (which Holt himself describes as works of art), or the 3.5-liter V6 biturbo EcoBoost engine.

Larry Holt, Multimatic's vice president of engineering, is clearly a wealth of knowledge, and has quick answers for most of the curious people at the Job 1 event. Some he can't answer, such as the aforementioned price, or the exact horsepower number.

Regardless, it was an eye-opening event, and only makes us even more heartbroken that we'll likely never own one. Still, there are 250 people out there who will have a GT come 2020, and it's clear Multimatic is making sure the cars will indeed be as super as they can be.