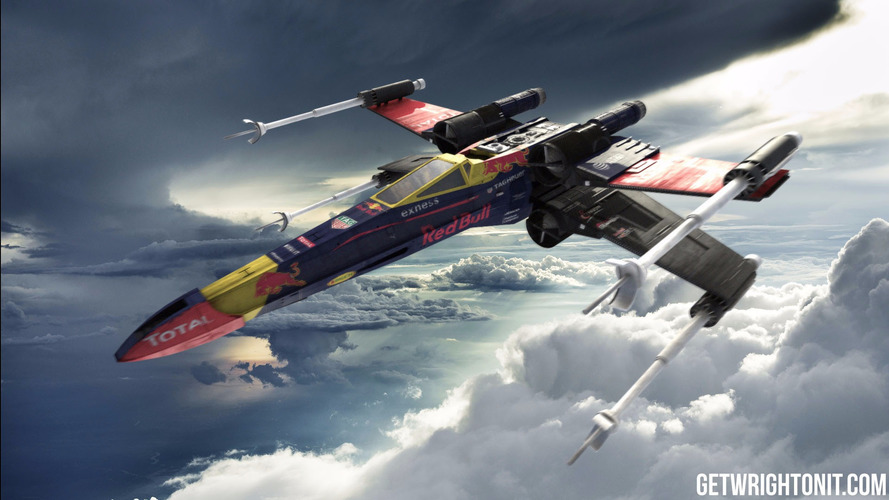 A digital artist has rendered the starfighter with Ferrari and Red Bull liveries.

Formula 1 liveries always look good. Even the bad ones - and there have been a very great many over the years - just have something about them that elevates them above other corporate paint jobs.

But the real test of any good color scheme, of course, is whether or not it still works when it is applied to something else. Like a, err, Star Wars X-Wing.

3D artist Dean Wright got out his digital crayons to render the Alliance’s starfighter craft with recent F1 liveries. Because Rogue One: A Star Wars Story has just been released into theatres and, well, why not?

He created the Ferrari X-Wing first. Now, I’m not a huge fan of the Scuderia’s current red-and-white colors, but I’ll admit it looks fantastic here. Even the sponsors’ logos seem appropriate in the context, somehow.

It helps that an X-Wing actually looks like an F1 car, if you squint a bit. It’s long and pointy, the engines could be sidepods, and the wings aren’t too dissimilar to some of the wilder aero concepts that have been seen.

After the Ferrari, Wright took a poll for what he should do next and the resounding answer was “Red Bull”.

Again, I’m not huge fan of the energy drink team’s colors and yet, again, they really work here.

Surprisingly, there is a link between the Red Bull team and the Star Wars franchise. Its cars carried Star Wars branding at the 2005 Monaco Grand Prix, which was held just a few days after Revenge Of The Sith hit theatres. It wasn’t a particularly successful exercise as David Coulthard retired with crash damage after 23 laps, followed on lap 59 by Tonio Liuzzi when his mount gave up the ghost.

There is motorsport - if that’s the word - in the Star Wars universe; Anakin Skywalker contested a podrace in The Phantom Menace. What are the chances we’ll see X-Wing racing in future installments?