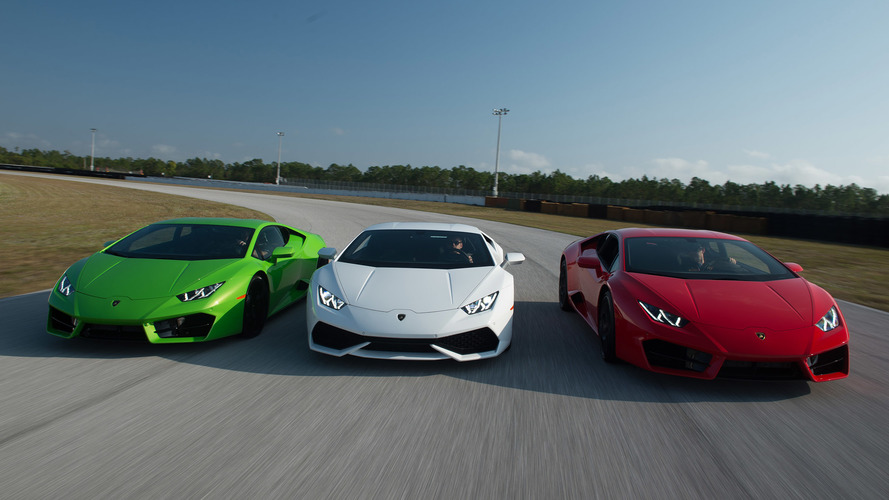 Planning on buying a Lamborghini? Then you need to ask your dealer about the brand’s entry-level driving school.

Test-driving cars sucks. Dealerships rarely are adjacent to fun roads, and even if they were, you're stuck with some ignorant schmuck from the sales department riding shotgun, preventing you from exploring a car's ability while chatting your ear off with incorrect info about the car. True story: I had a BMW dealer tell me the 2015 328i I was driving had a turbocharged 2.5-liter six-cylinder. At least he didn't say it was a V6.

Lamborghini recognizes these shortcomings, because rather than asking its well-heeled consumers to explore a Huracán or Aventador on public roads, it has the invitation-only Esperienza.

“The Esperienza is the starting level where we offer our future customers the opportunity to experience the Lamborghini world.” Lamborghini chief operating officer Alessandro Farmeschi said. “We speak about driving our cars in an environment that is not street-legal, but out on a race track where you can do all those things you can't normally do on a normal road.”

“Highly curated” by Lamborghini's dealers, the free-to-attend Esperienza breaks with a lot of “high performance driving experience” norms. In the case of the media event I attended, the curriculum covered half a day at Palm Beach International Raceway – instead of a traditional one- or two-day program – relying on a couple exercises and a single lead-follow session. The result is an event that's easily digestible for current owners looking to dip their toe in the track-driving pool and can whet the appetite of potential consumers.

Instructors break each exercise down to several runs, riding shotgun at every turn of the wheel and offering feedback on technique during the short break between laps.

Regardless of a customer's reason for attending Esperienza, the overarching goal is to increase their confidence behind the wheel. That's a big thing if, like me, your track experience is virtually nil. Instructors break each exercise down to several runs, riding shotgun at every turn of the wheel and offering feedback on technique during the short break between laps.

“You can experience in depth the handling of the cars and the acceleration. You touch much closer to what the product can offer, not just what it represents,” Farmeschi said.

In the first exercise of the day – a wide-open-throttle acceleration run followed by hard braking into a decreasing-radius left hander – the Huracán assaulted my senses. The sheer acceleration from the 580-horsepower, rear-drive tester and the insurmountable grip from the huge 305/35R19 Pirelli PZero tires dominated my senses in the first run. The grip off the line was staggering, making the $258,000 Huracán I was driving feel so fast that anything but early braking felt irresponsible.

But the instructor riding in the right seat, NASCAR 2010 Rookie of the Year Kevin Conway, pushed me to brake later and later, cutting my braking distance on each run. By progressively pushing harder and harder, Esperienza builds a student's confidence, both in their own abilities and the car's.

I covered the course faster and faster in each outing, safely exploring the Huracán's extreme capability.

The second exercise, a slalom run, reinforces the progressive aggression, only instead of braking later, drivers slowly begin applying smooth bursts of throttle in those razor-thin moments when the Huracán isn't actually turning. Again, the emphasis is on building confidence while getting the most out of the car – I covered the course faster and faster in each outing, safely exploring the Huracán's extreme capability. The slalom was also the only exercise of the day where the hosts busted out the stopwatch. Sadly, I wasn't the fastest – that honor went to Road & Track's Chris Perkins.

The practical instruction is fun, but Esperienza's exercises are rich in driving theory, too. Instead of talking at students in a classroom, instructors go out of their way to explain the basics of high-performance driving behavior and the physics at play while behind the wheel. Teaching a driver to be smooth on the gas, brake, and steering isn't hard, but explaining the physics behind doing so provides a broader understanding of the importance of silky inputs.

But focusing only on the education misses the point. Arriving at sunny PBIR on a December afternoon, the first thing I saw was the big Lamborghini trailer. An air-conditioned briefing room is there for the pre-track safety briefings and the post-event certification awards, and outside, a chef provides small bites, an array of beverages, and most importantly, proper Italian coffee or cappuccino.

Esperienza, as Farmeschi said, is designed to initiate students into Lamborghini's fast-paced, ultra-luxurious lifestyle. But it also makes you want a Huracán or Aventador, or perhaps even an Urus (Lamborghini's PR team responded to my questions about an Esperienza course for its eagerly awaited crossover with a laugh and a knowing smile), which, admittedly, is a big goal.

I left the track knowing that if I suddenly picked up a winning PowerBall ticket, one of Sant'Agata's supercars, not Maranello’s, would sit in my very big driveway.

“This program is about getting closer to those who want to become our customers in the future,” Farmeschi said.

And it works. I've long considered the question of Ferrari or Lamborghini the same way some people view Coca-Cola or Pepsi, or New York-style pizza and Chicago-style pizza: you're inherently predisposed to one or the other. For me, Ferrari's elegant lines and graceful performance have always been more appealing than Lamborghini's extreme, macho designs or punishing performance. But Esperienza converted me. I left the track knowing that if I suddenly picked up a winning PowerBall ticket, one of Sant'Agata's supercars, not Maranello’s, would sit in my very big driveway. But despite my pestering, the company's reps couldn't (or perhaps, wouldn't) tell me how many Esperienza students graduated to Lamborghini ownership.

But Esperienza is ultimately about more than just bringing future customers into the Lamborghini fold. It's the first step in the company's Squadra Corsa. Armed with the diploma-like certificate of completion, customers are eligible for the company's more involved driving courses. The one-day Accademia Intensivo ($6,995) and Accademia Avanzato ($11,995) are available in both traditional track settings and a hilarious-looking winter session that focuses more on snowy, sideways action than typical racing lines. Graduate from these programs, and you're eligible for the $25,995 Pilota program, which only uses the company's Super Trofeo racers. Complete that, and you can run in Lambo's one-make series.

Esperienza is not the best high-performance driving program on the market, but then again, it's not supposed to be. It's a stepping stone, a sample of what Lamborghini – both its cars and its Squadra Corsa – is capable of.