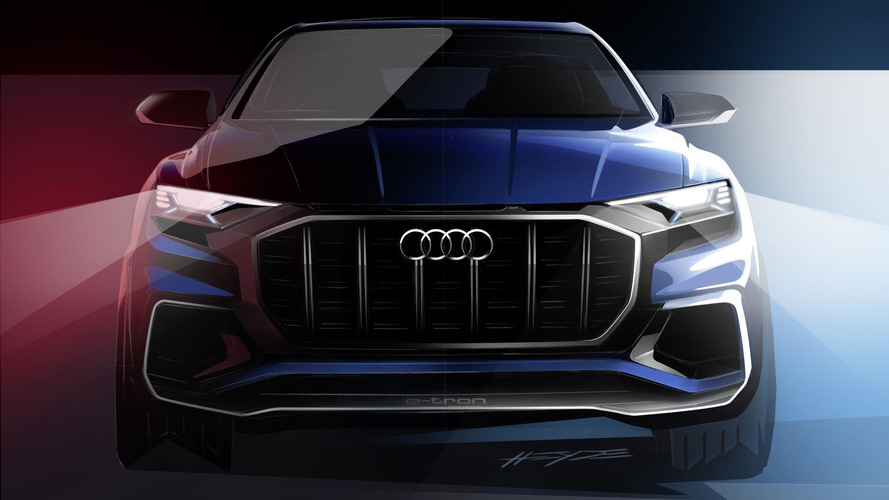 Audi will preview the first-ever Q8 next month at the Detroit Auto Show, but it won’t be until 2019 when the production model will arrive to expand the controversial niche of large coupe-SUVs. The two official renders have been included in an article published by Welt after interviewing Audi’s chief designer Marc Lichte. Details about the concept have not been released, but seeing as how there’s “E-tron” lettering on the front bumper, we’re likely dealing with an all-electric vehicle.

The man in charge of Audi’s designs proposes a new take on the corporate singleframe front grille, which hasn’t been reduced in size at all, but it does look different because of the double vertical fins. Around the chrome framing seems to be a thick piece of glossy black/grey plastic connected on the upper area of the grille with the sharp (laser?) headlights featuring a high-tech look. As for the front bumper, it hosts a pair of large vents to lend the Q8 an aggressive appearance.

The other teaser depicting the side profile shows the concept’s roofline won’t be as sloped towards the rear as it is on the BMW X6 and Mercedes-Benz GLE Coupe, but maybe it will look different in the metal. That being said, it’s still significantly more raked compared to the Q7 upon which the road-going Q8 will probably be based.

As a reminder, a test mule of the Q8 was caught on camera back in July this year using a modified Q7 body. The interior remains a mystery at this point, but in his interview with Welt, Marc Lichte says the A8 and Q8 will have a similar cabin that will set the two apart from the older Audis. There are going to be very few physical buttons as most of the functions will be accessible via the infotainment system and the all-digital instrument cluster. As a matter of fact, Welt mentions there will be conventional controls only to turn on/off the parking aid and to activate the hazard lights.

Lichte went on to specify that with the next-gen A8 due next summer, Audi will implement “a completely new operating concept that does not need a switch. All other models will follow this basic principle,” including the Q8.

More details about the Audi Q8 E-tron should be released very soon ahead of its premiere in Detroit, likely scheduled for January 9 or 10 during the show’s press days.

Audi will start the new year with a sensation: At the North American International Auto Show (NAIAS) in Detroit in January 2017, the premium manufacturer is to present the Audi Q8 concept. The near-production study represents a synthesis of the emotional styling of a coupé and the spaciousness that typifies an SUV. With this move, the brand is unlocking a new segment for the full-size category.

“With the Audi Q8 concept, we have created a new spearhead within our Q model line. Its design strongly evokes sportiness and prestige,” declared Audi Head of Design Marc Lichte. “What’s more, we believe an important aspect of this showcar is that it offers a spacious interior with four equally comfortable seats, even with the flat roof line.”

The study vehicle’s front end is imposing. The octagonal Singleframe is considerably wider than that in Audi’s current production models. It is positioned well forward, with three-dimensional sculpting. Many design elements of the Q8 concept are reminiscent of the Audi Ur-quattro of the 1980s. They include the extremely flat but very wide C-post, and the prominent, flared shoulders above the wheels. These balanced proportions give equal emphasis to the front and rear wheels – typically quattro.