Classic Camaro race car in need of a new driver 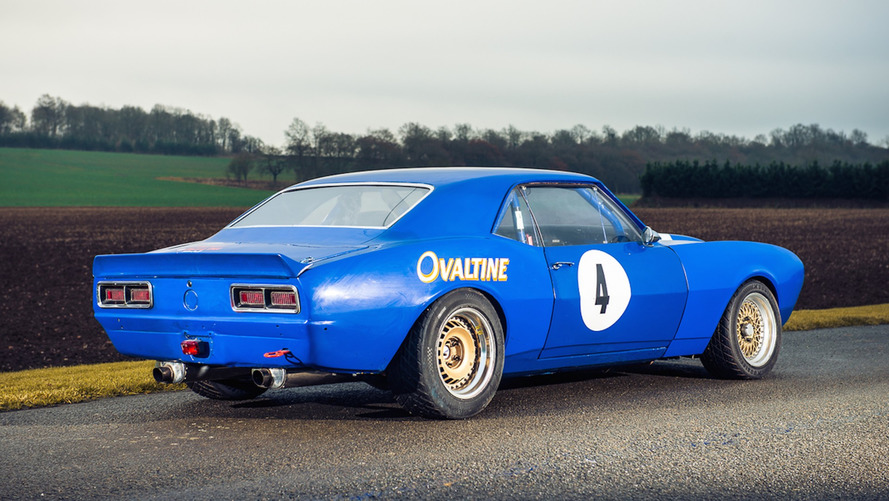 The introduction of the Camaro in 1966 ignited an all-out sales war between Ford and Chevy in the U.S. That clash would eventually trickle over to the track, where the two would battle it out for Group 2 glory in the American Trans-Am series.

Taking note of the Camaro's success stateside, in 1970, Bill Shaw Racing would ship the muscle car to the U.K., where it would find much of the same in the British Saloon Car Championship (BSCC) with former champion Roy Pierpoint at the wheel. Though it only ran for two years, from 1971 to 1973, it cemented itself as a BSCC icon. Now it’s heading to auction as part of the Silverstone Retro Race Car Competition Sale in 2017.

Gone is the original white and orange Ovaltine livery in place of a more poignant blue exterior with orange accents. It still wears the Ovaltine logo loud and proud on the rear fender, though, having been lightly refurbished in 1990 by then owner Martin Thomas for competition. Under the hood is a 5.0-liter V8 paired to a four-seed close-ratio Muncie 'rock crusher' gearbox.

Thomas remained in possession of the Camaro until 2004 before it was sold to the current owner who competed with it in Heritage Grand Touring Cars, Aston Martin Owners Club, Masters, and Classic Sports Car Club events. It even made a special appearance at the 50th Anniversary of the BTCC at Silverstone, and an on BBC’s Top Gear 50th Anniversary of Touring Cars special at Crystal Palace in 2014.

The car comes with the original steel doors, FIA papers, magazine articles, and files documenting its long and illustrious history. All the safety equipment is also up to date, including the seats, harnesses, and fire extinguishers. It’s a stunning piece of racing history past, and with an early estimate of £65,000 to £75,000 ($80,528 to $92,917), it won’t break the bank.

As the 1960s roared on, so too did the introduction of a new generation of powerful, big block V8    saloon cars in the United States that came to be known as 'Muscle Cars'. Ford claimed 'bragging rights' with its dramatic new Mustang, destined to become one of the all-time greats, whilst other 'Motor City' favourites included the Dodge Charger, Pontiac GTO, Plymouth Barracuda and the Chevrolet Camaro.

Introduced in 1966, the Camaro was offered in 2-door form with both coupé and convertible body styles to choose from, as well as a range of different engine sizes, and trim and styling packages. Top of the pile at Chevrolet was the macho Z28 powered by a rumbling 302cu.in., 5-litre small-block V8 and this was their chosen contender for the battles that lay ahead...

Whilst salesman in car dealerships across the States fought it out for units sold, Chevrolet decided that it wanted to take the fight to Ford on the race tracks of America and prepared cars that complied with the 'Group 2' regulations drafted for the Sports Car Club of America Trans-American Series allowing cars with up to 5.7 litre engines to compete. Famous Camaro drivers included Mark Donohue, ex-F1 pilot Ronny Bucknum and Jerry Thompson. It was Donohue though, who took the spoils in the 1968 and '69 seasons driving a Penske-prepared Camaro with utter domination in the Trans-Am series. It wasn't long before European teams and drivers spotted the successes of their American counterparts and these cars soon appeared at race circuits across Europe.

We are pleased to offer this particular historically important Chevrolet Camaro which was run and prepared by Bill Shaw Racing for the 1970 British Saloon Car Championship season, with former champion Roy Pierpoint at the wheel. Martin Thomas went on to campaign the car successfully for the 1971 - 1973 seasons, taking in rounds of the European Touring Car Championship as well as a busy season in the UK, with sponsorship provided by ICI 'Flame Out' fire extinguishers and Ovaltine and the Camaro in a distinctive white and orange livery.

A full season in 1971 was rewarded with a victory and fine podiums at the International European Meeting at Magny-Cours, Moorlands Trophy British GP Support Race at Silverstone, and the Yellow Pages meeting at Thruxton. One of the highlights that particular year came in the Iberia Trophy Race at the South London circuit of Crystal Palace, where Mike Crabtree in a Ford Escort, Gerry Marshall in his Vauxhall Viva and Martin Thomas in this Camaro fought a furious race-long battle, pushing each other to the limits. This moment has since been immortalised in the BBC's '100 Greatest Sporting Moments' with heightened excitement coming from Murray Walker's commentary!

At the end of the 1973 season, Martin Thomas switched to the second generation Camaro and his, slightly battle-worn, steed was allowed to rest on its laurels for a few years. However, in the early 1990s, Martin decided to rebuild the car and get it back out on circuit again, running a 5.0-litre V8 engine mated to a four-speed close-ratio Muncie 'rock-crusher' gearbox and painting the car in a blue livery.

Remaining in his possession until 2004, the car was then sold directly to our vendor who has since successfully competed in Heritage Grand Touring Cars, Aston Martin Owners Club, Masters, and Classic Sports Car Club events as well as a number of demonstrations including; the 50th Anniversary of the BTCC at Silverstone, an appearance on BBC's Top Gear 50th Anniversary of Touring Cars with Richard Hammond and 'The Stig' at the Wheel and the reunion at Crystal Palace in 2014 when the famous 1971 race was celebrated with Mike Crabtree back behind the wheel of his John Willment Ford Escort and Martin Thomas demonstrating this car, the trusty blue Camaro.

Supplied with a pair of steel doors, old FIA papers, magazines and a wonderful history file, this Camaro is the perfect candidate for 'Blue Riband' events like the Gerry Marshall Trophy at the Goodwood Members Meeting or perhaps the HSCC Historic Touring Car Championship. We recommend that potential buyers should satisfy themselves as to the legality and currency of all the safety equipment in this car, i.e. seat, harnesses and fire extinguishers.

This cracking Camaro has the stance and presence of a serious racing car and rarely do competition cars with this history and provenance come to market. It would be welcomed by organisers anywhere and fondly remembered by the millions who have watched the black and white footage from Crystal Palace. We urge you to come and look at this Camaro with your own eyes.