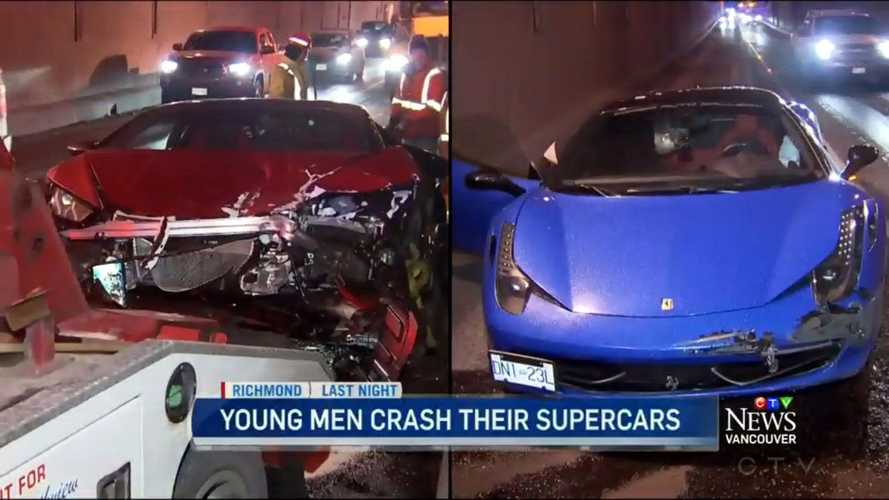 Police think their inexperience was a factor, potentially ruining supercars for everyone.

In a world where there are plenty of people who can afford to buy a car that operates at a level way beyond their ability, it’s not unusual to see a pair of supercars that have crashed into each other. But what makes this one a bit more out of the ordinary is that at least one of the drivers was a “novice”.

The crash occurred last Thursday as the red Lamborghini Huracan and blue Ferrari 458 Italia drove through the Massey Tunnel in Vancouver, Canada. Both cars were wearing “N” license plates, indicating that the drivers had only recently gotten their license.

According to CTV News, local police described the drivers, both males in their 20s, as “inexperienced”. However, they said that only one of was still technically a novice.

The cause of the crash is unknown, however Sgt. Lorne Lecker said it seemed as though speed was not a factor, but their lack of experience may have been.

“These cars have a great deal of power and it's very easy to give into the impulse to try to use that power,” Lecker said. “And on these roads, it can be very dangerous."

Neither driver was injured. The police suggested the cars had been totalled, but that assessment seems pessimistic. But the chances of the drivers’ parents ever letting them behind the wheel of anything more extreme than a Toyota Corolla are not looking good.

The incident has inevitably sparked debate about whether or not newbies should be allowed to drive such powerful cars. As anyone who has driven a genuinely fast car, or at least one a lot faster than their previous experience, will know, it can take your brain a while to catch up. The sensible approach, of course, is to take it steady and build the speed up so you can acclimatize. But youth and sense rarely go together.

We can only hope a couple of idiots don’t ruin it for everyone else.