220-hp TSI model has been replaced by a slightly stronger version.

It was almost two months ago when Skoda took the wraps off the Octavia facelift, but without showing the performance vRS model and the rugged wagon-only Scout. Now, one of the pieces of the puzzle has fallen into place as the sporty version in both liftback and wagon flavors has been revealed with the same rather peculiar split headlight design featuring optional adaptive full-LED tech. The front fascia obviously looks better than it does on the lesser Octavia models, but we still wouldn’t call it attractive mainly because of the unusual lights.

Moving at the back, Skoda’s designers are giving the taillights a mild update with slightly changed graphics and an all-LED configuration as standard. In addition, also noticeable is a full-width red reflector lamp sitting above the glossy black diffuser flanked by the dual exhaust tips. Rounding off the changes are the LEDs replacing the conventional bulbs illuminating the license plate. 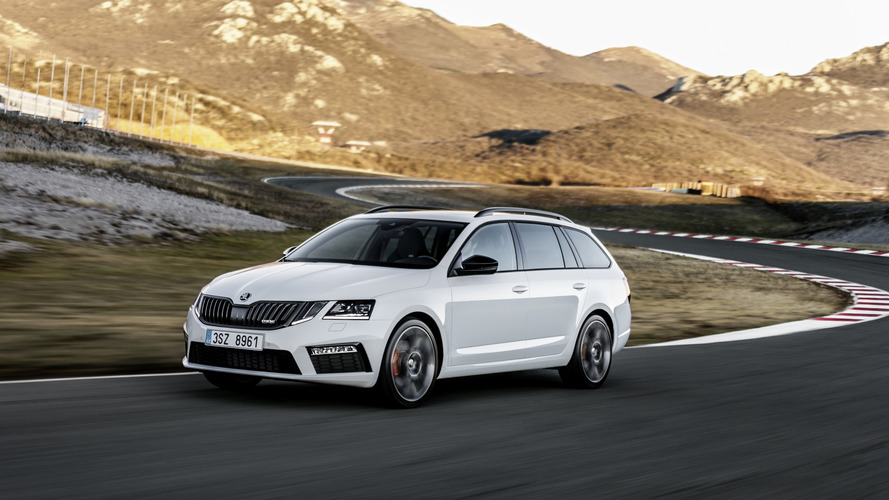 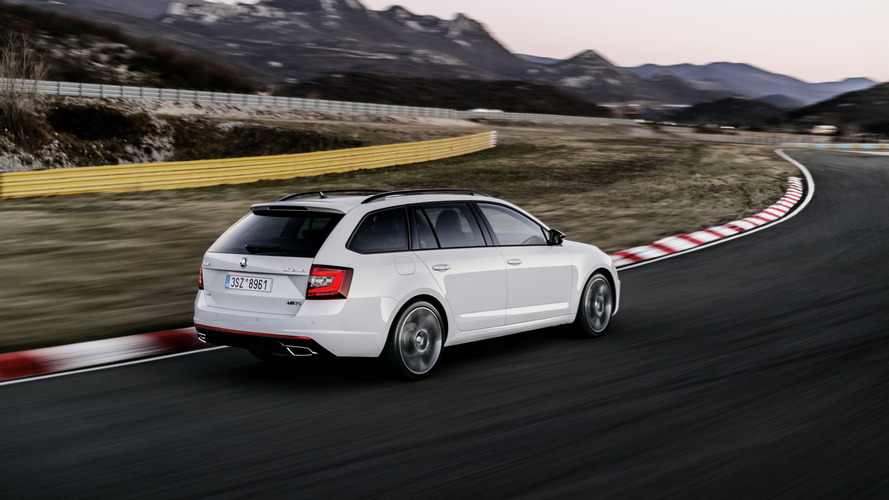 As far as the oily bits are concerned, Skoda is dropping the 220-hp version of the 2.0 TSI engine, which means initially you’ll only be able to get the version with 230 hp (169 kW). We’re using the word “initially” because rumor has it a beefier gasoline model will join the lineup in 2017 and it will likely have 245 hp (180 kW) to match the Golf GTI facelift. There aren’t any changes on the diesel front, so the 2.0 TDI will solider on with 184 hp (135 kW) delivered to the front wheels or to an optional AWD setup. 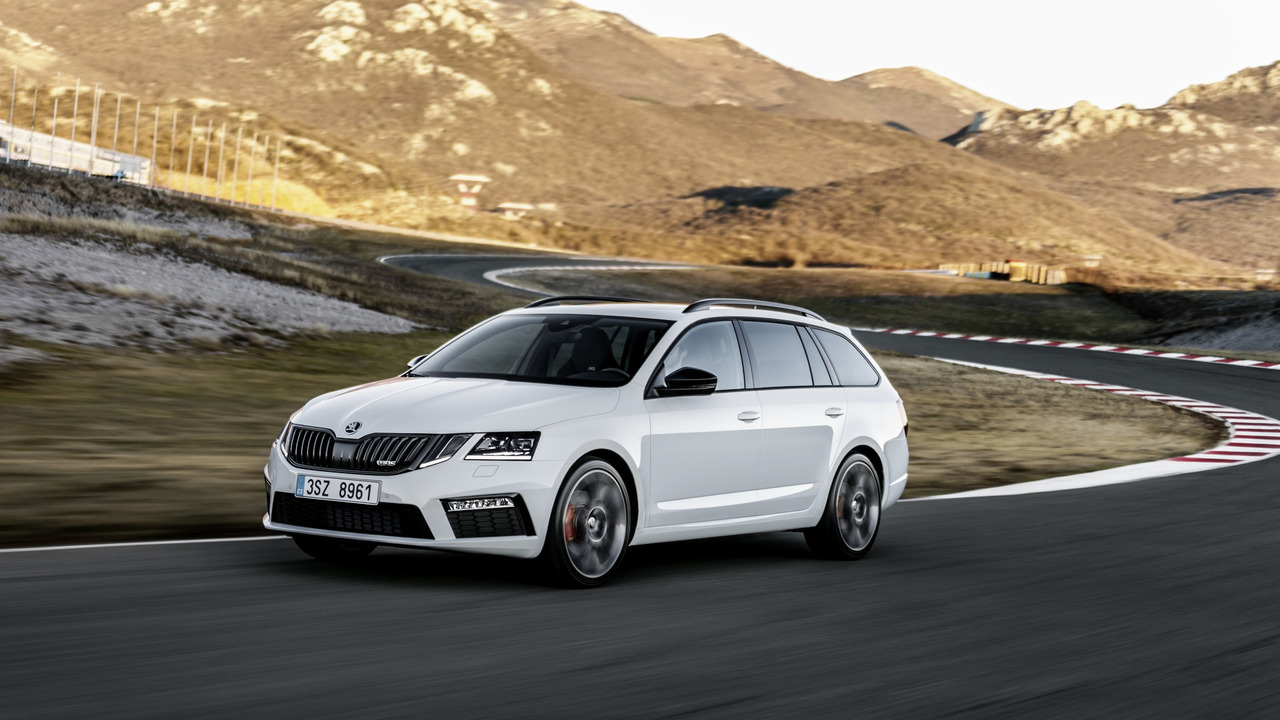 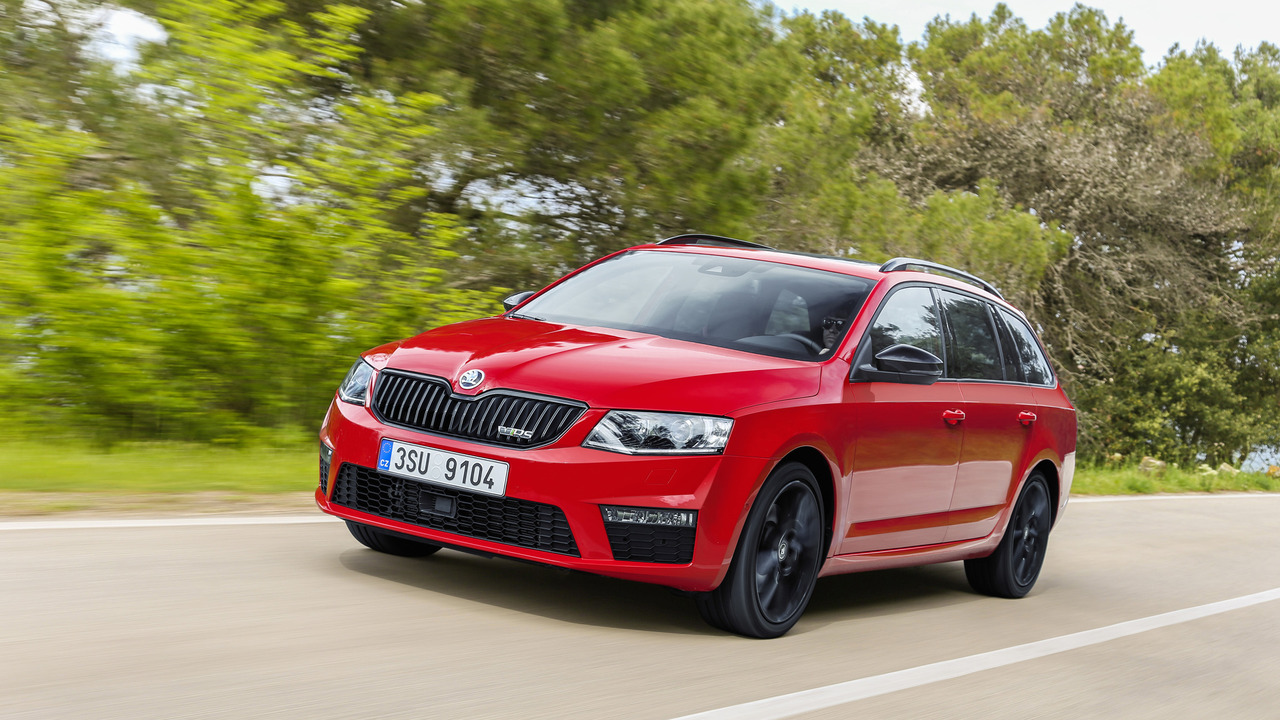 The gasoline version and the front-wheel-drive diesel come as standard with a six-speed manual transmission, but you can pay more and opt for the six-speed dual-clutch ‘box. The latter will be the sole offering for the TDI-powered AWD model.

Compared to less punchy Octavias, the RS sits 15 mm lower thanks to the sports suspension and has a 30-mm wider rear track than the model it replaces. In addition, Skoda is painting the brake calipers in red and has an array of 17- to 19-inch alloy wheels, with the largest set also available in silver. Some of the other goodies include progressive steering, selectable driving modes, Dynamic Chassis Control, and the controversial (optional) Performance Sound Generator.

Images of the interior cabin have not been released, but the changes should be in line with those of the non-RS models. That means Skoda is going to fit the sporty compact liftback and wagon with a new array of infotainment systems featuring capacitive-touch displays measuring 8 inches for Bolero and Admusen while the top-spec Columbus will grow to 9.2 inches.

Skoda will have the Octavia RS facelift on sale in the first months of 2017. 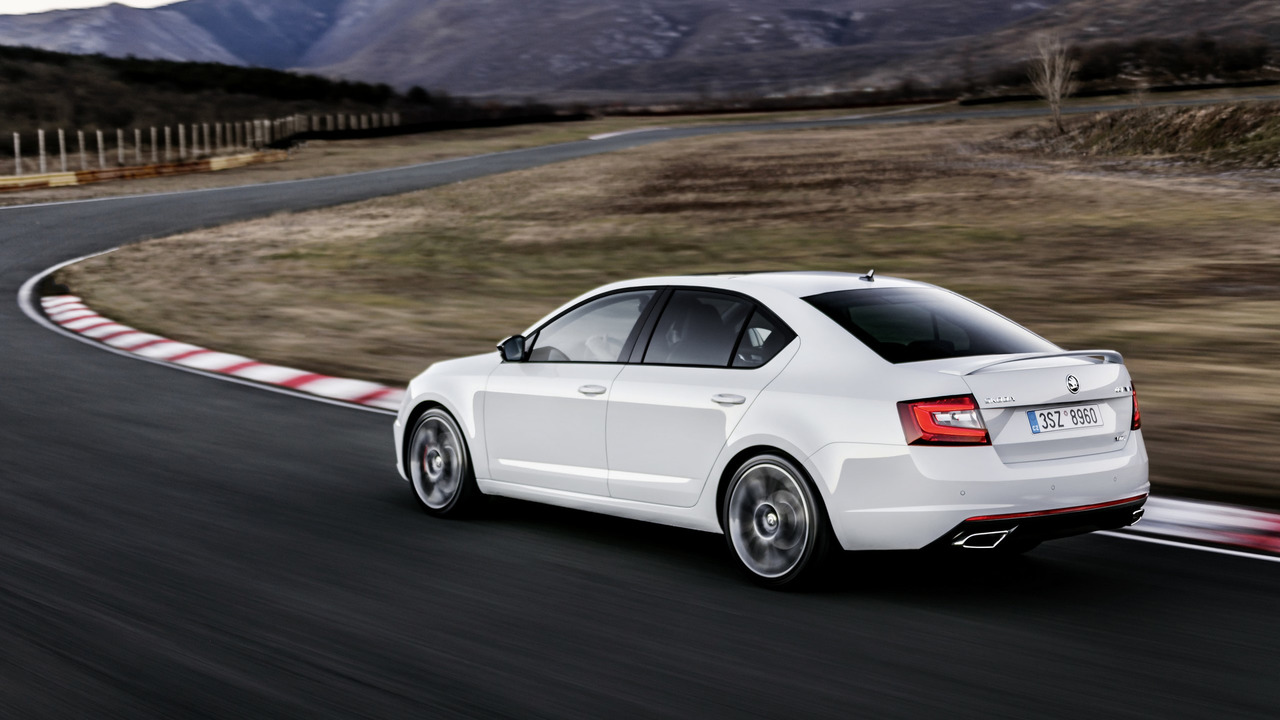 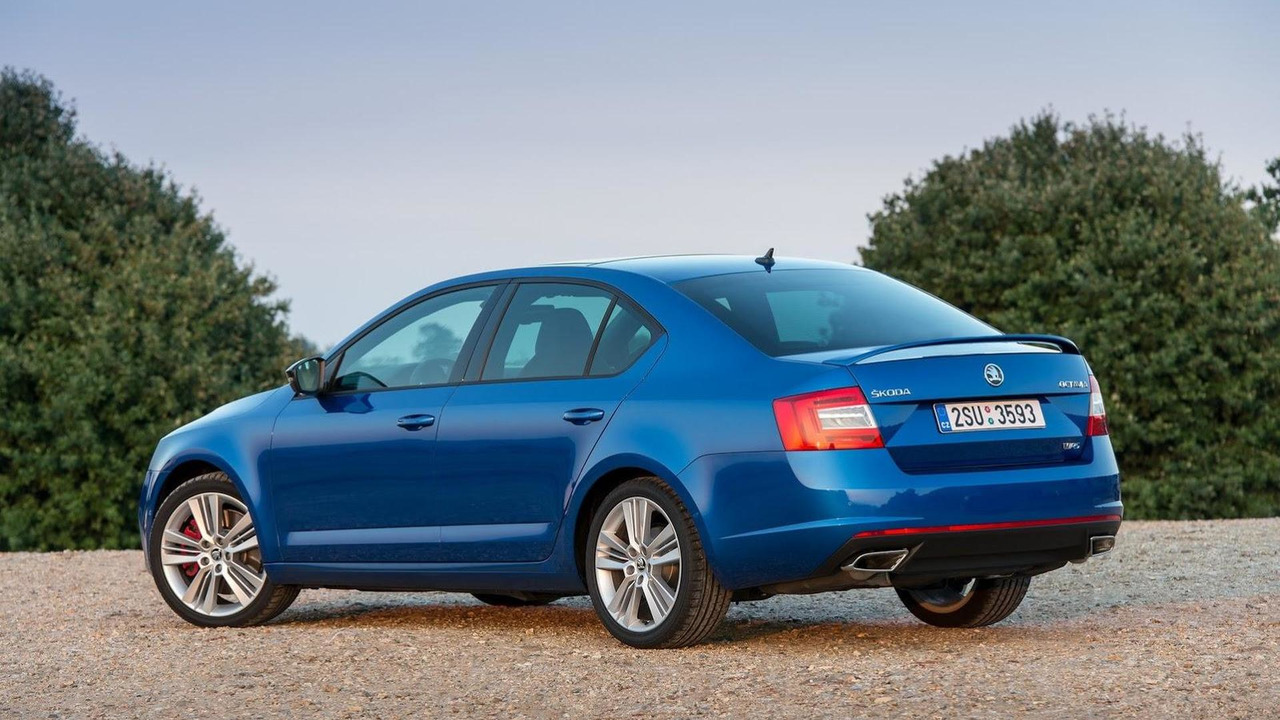 ŠKODA OCTAVIA RS: The most powerful OCTAVIA of all time

Mladá Boleslav, 20 December 2016 – Just weeks after introducing the extensively modernized ŠKODA OCTAVIA, the Czech automobile manufacturer presents the top model in the series – the ŠKODA OCTAVIA RS. The new front section, modified rear and sporty interior Ambient highlight its dynamic character. The upgraded ŠKODA OCTAVIA RS is available as a saloon and estate. Both body styles have two four-cylinder engines to choose from. While the 2.0 TDI diesel engine has the same 135 kW (184 hp) output as previously, the performance of the 2.0 TSI petrol engine has increased by 7 kW (10 hp) to 169 kW (230 hp), making it the strongest and fastest series-production model in the history of the ŠKODA OCTAVIA. New premium technologies supporting infotainment, connectivity and driver assistance systems emphasise the exceptional position of the compact sports car in its segment.

Dynamic design
The appearance of the new ŠKODA OCTAVIA RS accentuates the extensively redeveloped design of the series in a particularly sporty and emotional way: The new front section with a wider radiator grille, which has been extended with additional headlamps featuring a crystalline look, and the even wider air intakes with honeycomb structure in the redesigned bumpers are masculine and dynamic. The four full-LED headlights with Adaptive Front-lighting System (AFS), as well as the LED side-mounted headlights integrated into the bumper shape the new front end. At the rear, the saloon’s spoiler and the estate’s roof spoiler set independent accents.

The rear is dominated by a powerful black diffuser element and broad red reflector lamp above. These elements are unmistakable characteristics of the upgraded ŠKODA OCTAVIA RS. In addition, the model now features LED-technology license plate illumination and taillights in the classic C-design as standard.

The interior of the new ŠKODA OCTAVIA RS is characterized by the sporty black interior. The RS-Sport seats provide plenty of lateral support thanks to high sides and integrated headrests. In addition to the leather/fabric combination, the sports seats are now also available in an Alcantara version. The multi-function sports steering wheel (for DSG gearbox with shift paddles) has a perforated leather crown. Ambient lighting comes as standard. The recesses of the door handles are illuminated, the pedals shine in an aluminium finish, and the entry panels bear the RS logo. ŠKODA-typical ‘Simply-Clever’ solutions include an umbrella under the passenger seat and a removable LED lamp in the boot of the estate.

Chassis, technology, engines
The 15 mm lower sports suspension and the rear track, 30 mm wider than the predecessor, as well as the red brake callipers underline the dynamic character of the new ŠKODA OCTAVIA RS. 17-inch wheels are available as standard, while 18- or 19-inch wheels are available as an option. On request, 19-inch light-alloy wheels are available in silver. Progressive steering, Performance Mode Select with Performance Sound Generator (option), the stability program ESC with electronic cross barrier XDS+ and Dynamic Chassis Control (DCC) add to the intensive driving pleasure of the new ŠKODA OCTAVIA RS. DCC allows the driver to choose between Comfort, Normal or Sport modes.

Infotainment and ŠKODA Connect
As all versions in the series, the current ŠKODA OCTAVIA RS features the latest generation of infotainment systems. The capacitive touch displays are designed in glass (except for the series music system Swing).  The top version is the navigation system Columbus with a 9.2-inch monitor, WLAN hotspot and optional LTE module.

Driver assistance systems
The wide range of driver assistance systems in ŠKODA OCTAVIA RS sets new standards in the compact class. New features include Trailer Assist, Blind Spot Detect, which warns the driver of vehicles in the blind spot, and Rear Traffic Alert, which monitors side and rear traffic when leaving a parking space. The Crew Protect Assist closes windows and sunroofs in the event of an imminent accident, tightens driver and passenger seatbelts and works in conjunction with the improved Front Assist including city emergency braking and predictive pedestrian protection.

History
The abbreviation RS was first used for racing cars in 1974, and has been used for the top sporty versions in the ŠKODA model range since the year 2000. To date, more than 200,000 ŠKODA OCTAVIA RS models have been sold worldwide, of which 100,000 units of the third generation that was launched in 2013.