You'll likely never get to do this yourself, so this clip will show what will happen from holding down the brake while keeping the engine near redline.

The crew from the popular Hydraulic Press Channel on YouTube are branching out to other forms of destruction, and it shows what happens when a brake disc takes way more punishment than the component can handle in a new video. The result is smoke, fire, a flaming GoPro, and a spectacular mechanical failure.

The team decides that its thoroughly beat 1990 Ford Fiesta doesn’t need front brakes and chooses to remove the discs through a very unorthodox method. The main host jacks up the front end, removes the wheel, and floors the throttle. With the engine near redline, he mashes the brake without getting off the gas. An initial trial ends after the other wheel has smoky burnout, but a second attempt gets the job done. 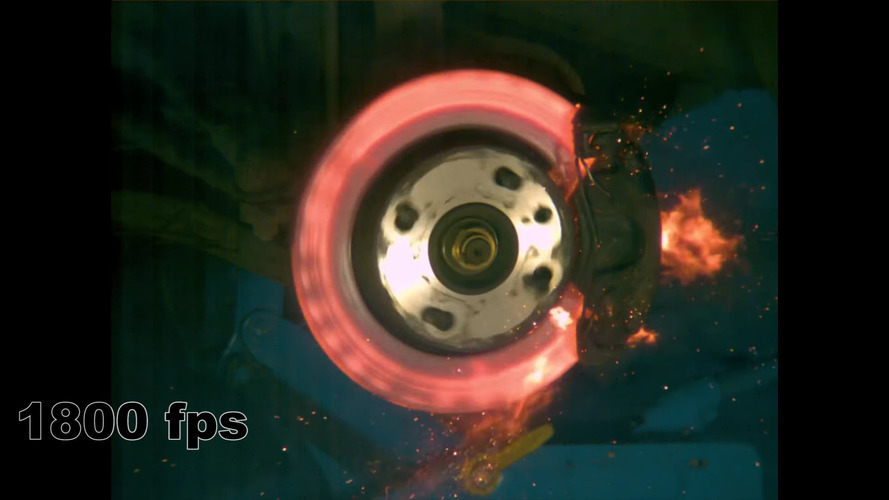 The resulting sparks and flame are rather spectacular. Eventually, the disc can’t take anymore of this extreme friction and flies apart. The team has enough cameras in place that you can see the failure in slow motion and with a thermal camera.

Destroying one rotor isn't enough, so the host puts the thermal camera on a higher setting and films the attempted destruction of the disc on the other side. This attempt doesn’t go successfully either, but you need to watch the clip to see exactly what happens.

In addition to these stunts, the channel Beyond the Press also lets the host do things like demonstrate the destructive possibilities of his air cannon. There are also clips showing real work with the hydraulic press.

If you prefer the beautiful simplicity of this crew demolishing stuff with the press, then there’s lots of automotive-related destruction there, too. Whether it’s compressing a coil spring to the breaking point or demonstrating the amazing strength of carbon fiber, it's easy to lose time watching the channel.

Gallery: Brake Disc Destruction by Beyond the Press