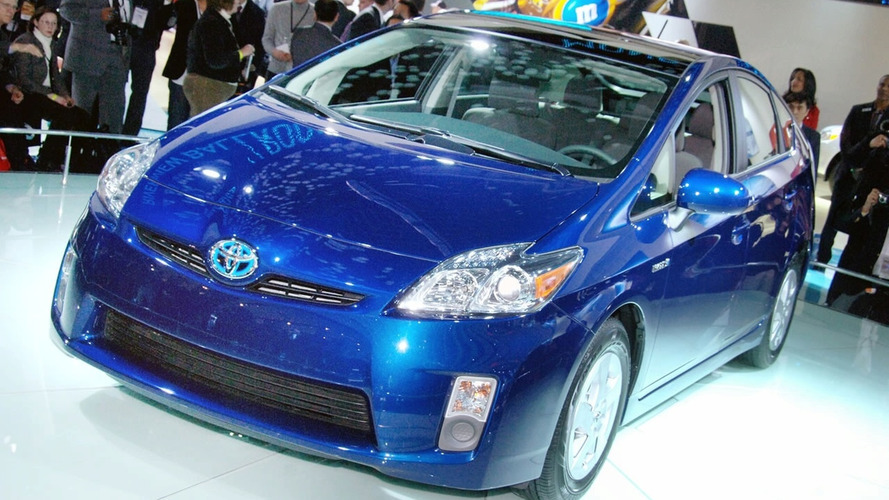 The third generation Toyota Prius was introduced today at the Detroit Auto Show. This new hybrid model is more efficient, while being faster and more powerful than previous versions.

The third generation Toyota Prius was just unveiled in a news conference at the Detroit Auto Show. The 50mpg car features a hybrid system with over 90% new parts when compared to the last model.

Toyota Division General Manager Bob Carter introduced the vehicle not as a comparison to other brands' hybrids, but in comparison to the first two Toyota Prius models. Its higher fuel economy is nearly 25% better than the first generation Prius. The second-gen got 46mpg.

Fuel economy improvements come from the vehicle's shape, a new engine, and refined hybrid powertrain. Carter remarked how important the car's shape is, because the company believes it has become iconic. Not wanting to alter the shape substantially, they pulled the peak of the roof back by four inches. This gives rear passengers more headroom, while making the Prius more aerodynamic. Its drag coefficient has been reduced to .25 from .26.

This is matched by a reduced overall electric power consumption, made possible by a refined air conditioner. Optional LED headlights also use less electricity than the standard headlights. Another available option is a solar sun roof which can power the ventilation system. When parked, it will use solar power to run fress air through the vents, in turn reducing the cabin temperature. By the time the driver returns to the vehicle, the interior is cooled down, and the driver is less likely to use the a/c.

Next up, Toyota refined their Hybrid Synergy Drive system by almost completely overhauling it. The "inverter, motor, and generator" are all smaller and lighter. The new system also recovers energy from heat typically lost through the exhaust. Toyota used the same battery module as found on the 2nd generation car.

0-60mph time has improved to 9.8 seconds, down from 10.5. Drivers also have the option of choosing between three drive modes: EV, Eco, and Power. The first can be used to run the car strictly off battery and at low speeds for about a mile. Eco refines performance for more fuel economy, while Power responds with a faster burst of acceleration when the driver pushes down the gas pedal.

Still snubnosed at the front and stubby at the back, engineers worked to free up room in the cabin. Without increasing length or width, they managed to open the passenger compartment by five cubic feet. The driver also gets a new display showing fuel consumption, energy flow, and other data meant to "help the driver improve fuel consumption." Besides the solar roof, new options on the car include remote a/c, a pre-collission system, lane assist, intelligent parking assist, and SafetyConnect. The last option combines collision notification, a stolen vehicle locator, and a S.O.S. emergency call button.

Over 160,000 new Toyota Prius cars were sold in the U.S. last year. Toyota plans to increase that number by 20,000 with the new model. The third-generation Toyota Prius goes on sale in the U.S. and Japan this spring, with dealerships in 78 other countries soon to follow.