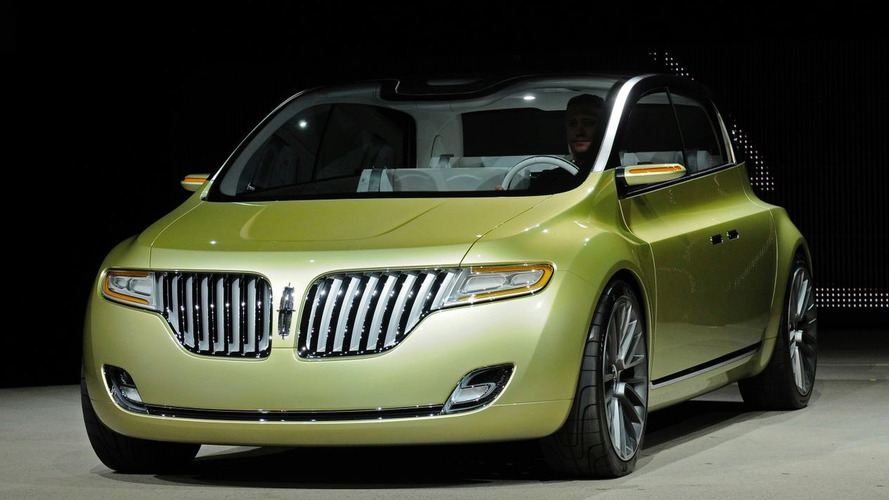 A few days ago we brought you news that Lincoln would unveil a mystery concept at the Detroit Auto Show and now the mystery has been solved.

A few days ago we brought you news that Lincoln would unveil a mystery concept at the Detroit Auto Show, now the mystery has been solved thanks to the company's unveiling of the new Concept C.

Although we correctly predicted the concept would feature suicide rear doors, we definitely weren't thinking the concept would be a small hatchback that feels kind of French. Up front is the large toothy grille from the recently introduced MKT seven-seat crossover while another key design attribute is the concept's "go kart" stance due to the wheel-at-each-corner design. Lincoln points out that their main objective was to create a "bold front profile, low shoulder, high beltline, wide C-pillar and compact bustle back" in order to have a truly unique appearance unlike anything else in the entry-level luxury class.

While putting the words hatchback and luxury in the same sentence may seem counter intuitive, a quick look at the interior would make you think the two go together like peanut butter and jelly. The bench seats are covered in high quality white leather while chrome detailing and a light gray wood veneer help the concept feel as if it were from the pages of a high-end furniture magazine. Of course being a car of modern times, the company is quick to point out that the concept uses recycled wood and the seats are upholstered in chromium-free leather and filled with soy foam.

Power comes from a 1.6-liter EcoBoost engine that produces an estimated 180 horsepower and 180 ft.-lbs. of torque. It is hooked up to Ford's new dual-clutch PowerShift six-speed transmission which allows the concept to return an estimated 43 mpg highway, nearly 25 percent better than what a 2.0-liter Ford Focus can achieve.

Dimensionally the concept is the same overall length as the Ford Focus and is as wide as the Lincoln MKZ / Ford Fusion but only weighs a respectable 2,750 lbs.

Several high-tech systems are built into the concept including SYNC, internet access via Bluetooth enabled phones, and a new in-car companion that features a life-like avatar. The avatar, named EVA, responds to conversational speech and can accesses all vehicle and SYNC functions as well as provide information to the driver. It can even sense a person's mood based on their voice and driving style and then suggest a song from their SYNC library to fit their current situation. EVA can also read you the morning's news, check your e-mail, and even tell you where to get gas based on the car's fuel level, your driving habits, and gas station locations and current prices.