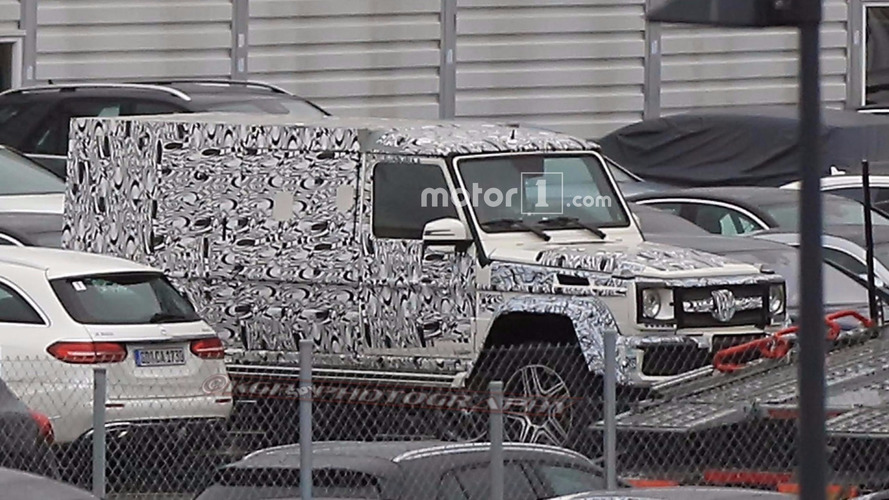 There's a ton of extra room at the back. There might even be enough to add an extra row of seats.

Photos have shown the next-generation Mercedes-Benz G-Class testing multiple times throughout the year, but our spies recently had a big surprise when Mercedes unloaded a long-wheelbase variant from a hauler. This is the first look we are getting at this larger Geländewagen.

From the front, this test mule looks practically identical to previously spied examples of the next G-Class. The only minor tweak is the single-bar grille as opposed to the three-slat or open design on other examples. However, this vehicle has quite a bit of extra room on the back, and there isn’t a spare wheel on the rear. Mercedes’ camouflage is quite effective and makes it impossible to notice any styling changes at the tail.

Given how much length that Mercedes adds to the back, the long-wheelbase G-Class would certainly offer more room for rear passengers and maybe better cargo capacity, too. It’s even possible that the extra real estate could allow for a third row of seats.

A long-wheelbase G-Class would presumably ride on a stretched version of the new underpinnings for the standard model. The latest chassis reportedly saves at least 440 pounds (200 kilograms) or much more over the outgoing version. Overall width is allegedly about four inches (10 centimeters) more than the current model.

We can’t know yet whether Mercedes would offer an AMG variant of the long-wheelbase G-Class, but if the automaker does it would probably share the biturbo 4.0-liter V8 with the regular-size next-gen G63. Depending on application, the powerplant can make as much as 603 horsepower (450 kilowatts) in current models like the E63.

The standard G-Class should debut in the latter portion of 2017. Since this is the first time we are seeing the long-wheelbase variant, its development might not be as far along. Don’t expect to see the larger version premiere until sometime in 2018 at the earliest and perhaps even later.