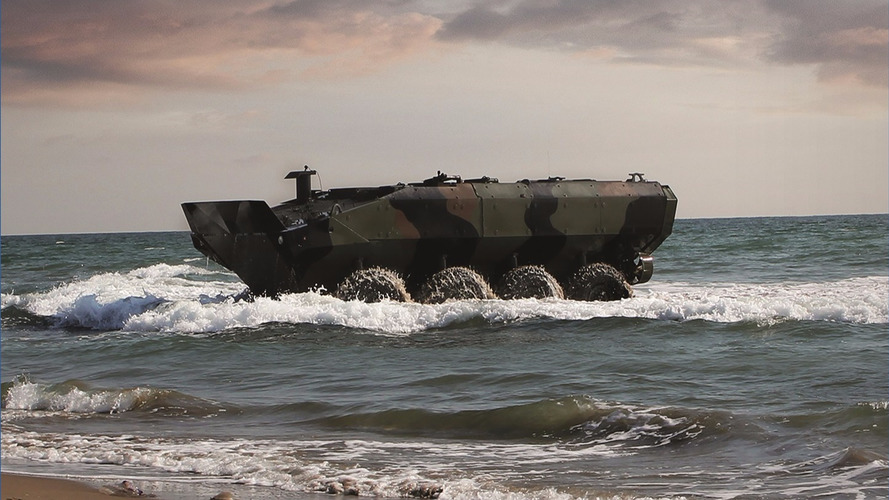 The 700 hp ACV 1.1 can bring the Marines to your door, even if you live a volcano in the middle of the ocean.

It is the first in a run of 16 prototypes that will undergo an intensive testing regime in the hands of the Marines. With eight-wheel-drive and the ability to launch from a ship, the ACV is perhaps the ultimate go-anywhere vehicle.

BAE Systems designed, engineered, and built the ACV, on a platform produced by the defense division of Italian truck maker Iveco.

The ACV will replace the current Amphibious Assault Vehicle (AAV). The Marines’ brief for the new vehicle stipulated that it be affordable and production-ready, have better protection from bullets and bombs, improved mobility on land and water, and be more easily transportable.

According to its maker, the ACV is highly effective at sea and highly mobile on land, and features state-of-the-art systems “survivability”.

It can carry 13 Marines in suspended seats and has a crew of three. Power comes from a Fiat Powertrain Technologies (FPT) engine serving up 700 horsepower, significantly more than poke than the AAV has.

Incidentally, FPT – and Iveco – is owned by the Agnelli family, the biggest shareholders in Fiat Chrysler Automobiles, but it is not directly related to the automaker.

No other details of the ACV’s specification have been given, no doubt because they are extremely highly classified. “If I told you, I’d have to kill you” classified.

It was only in November of last year that BAE was awarded the contract to produce the ACV. In it’s 70-year history, BAE has built than 100,000 combat vehicles of various types for military forces around the world. And there are 30,000 military-spec Iveco vehicles in service right now.

Iveco Defense Vehicles CEO Vincenzo Giannelli said: “Iveco Defense Vehicles have a long-standing legacy of building multi-purpose, protected and armoured platforms, including solutions for amphibious operations. That expertise coupled with the hard work of our dedicated ACV team with BAE Systems has allowed us to deliver the first of these vehicles ahead of schedule.”