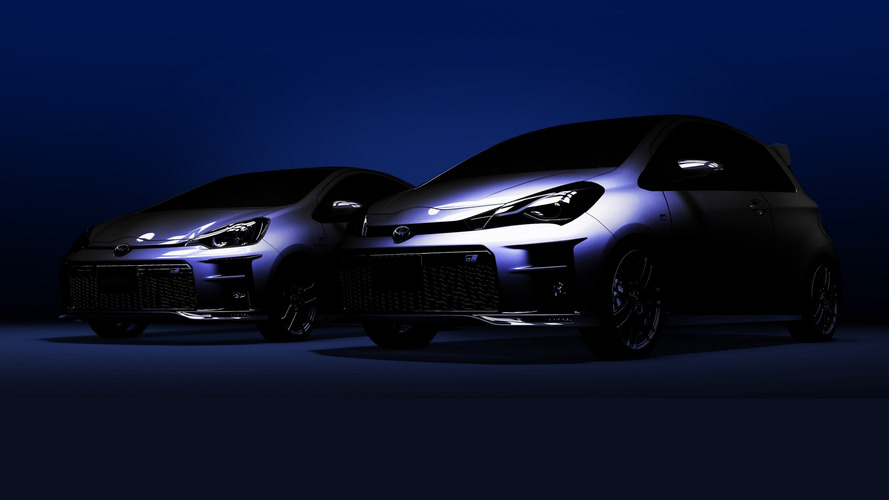 No, you're not seeing double. There are actually two different cars in this teaser.

If the two names are not ringing any bells, the Vitz is the JDM version of the Yaris whereas the Aqua is a Prius c sold in Japan. Far from being the most exciting cars out there, the two hatchbacks are heading to next month’s Tokyo Auto Salon to show off their sporty body kits prepared by Gazoo Racing.

Toyota is being coy about the details, but through this teaser we are able to notice both cars are getting a massive lower grille with “GR” lettering and flanked by beefy vents. Also visible is a front spoiler lip and a dark tint for the headlights to make the cars look a tad more aggressive. A sporty suspension setup with a lowered ride height is part of the package, as are the large double-spoke alloy wheels with brake calipers painted in the same hue as the body.

The three-door Vitz/Yaris also appears to have a roof-mounted rear spoiler and chances are the Aqua/Prius c has a similar setup. As a matter of fact, the attached teaser makes the cars look almost the same, but that will change once the two concepts are going to be revealed in full. There’s no word just yet from Toyota whether there are any changes underneath the hood to match the new appearance.

The official premiere is going to take place on January 13 when Toyota will also showcase in the Land of the Rising Sun the Yaris WRC, a customized C-HR crossover with Toyota Racing Development goodies, and a GT3-spec Lexus RC F. On top of that, a custom C-HR fitted with an assortment of Modellista bits and pieces will share the spotlight with other C-HRs equipped with Toyota-branded parts and accessories.

For a true Yaris hot hatch from Gazoo, we will have to wait until next year when Toyota will take the wraps off a WRC-inspired road-going performance model based on the three-door model teased just a few days ago.

Toyota City, Japan, December 16, 2016―Toyota GAZOO Racing / Lexus GAZOO Racing will be participating at the Tokyo Auto Salon 2017. Toyota GAZOO Racing will be exhibiting new concept models based on the Toyota Vitz and Toyota Aqua. The Tokyo Auto Salon is an event for customized cars, which is scheduled to be held at Makuhari Messe in Chiba Prefecture, Japan, from January 13 to 15, 20171. In addition, the Yaris WRC, which will compete in the FIA World Rally Championship (WRC) from January 20, 2017, will be exhibited in Japan for the first time.

Through the participation in motorsports activities such as the 24 Hours of Nürburgring, the World Endurance Championship, as well as a variety of rally competitions, Toyota GAZOO Racing aims to develop its people and make ever-better cars. By utilizing the technologies and knowledge that have been acquired through these activities, Toyota GAZOO Racing helps to contribute to the development of new vehicles.

Toyota GAZOO Racing's theme for the Tokyo Auto Salon 2017 is "Open Pit, Open Garage," and the displays and activities at its booth will help to communicate some of its many activities to the public. Toyota GAZOO Racing will introduce cars that have competed in various motorsports activities, as well as cars that have been developed as a result of these competitions. A section of the booth will also be dedicated to introduce how vehicle customization can help to increase vehicle enjoyment.

In addition to the Yaris WRC, together with the Vitz and Aqua TGR concept models, the Toyota GAZOO Racing booth will feature a customized version of the newly launched C-HR, vehicles that participated in the 24 Hours of Nürburgring, alongside successive generations of cars that have competed in the WRC. Furthermore, Lexus GAZOO Racing will also feature the world premiere of the latest GT3, which is based on the Lexus RC F.

Toyota GAZOO Racing will also set up a special booth at a separate event hall. A number of C-HR models which have been customized with genuine TRD, Toyota Modellista, and Toyota brand parts and accessories will be exhibited. This will help to enhance the appeal of vehicle customization.

Details regarding the vehicles that will be exhibited, as well as information about the booths will be updated frequently on the Toyota GAZOO Racing website.