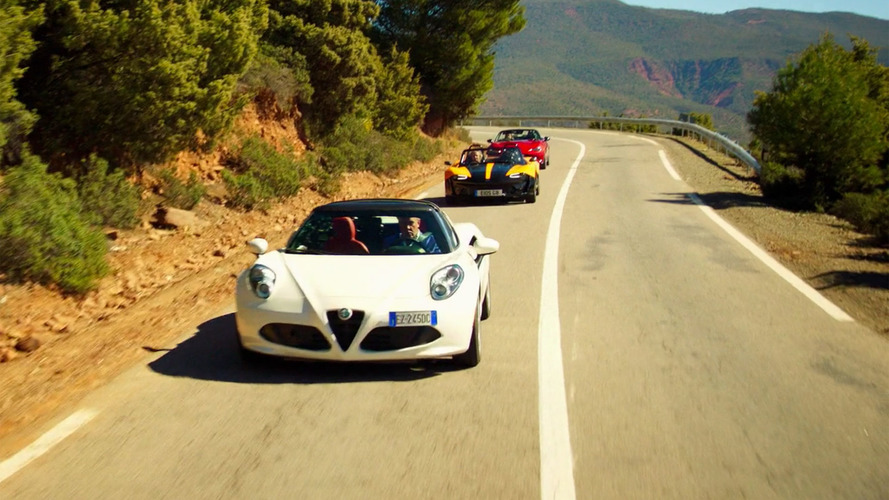 Everything you need to know.

After trying their hand at building eco-cars and racing two German track toys last week, Jeremy Clarkson, Richard Hammond, and James May are in… The Netherlands? Well, to start at least. This week’s episode of The Grand Tour sees the trio heading to northern Africa to put a global collection of sports cars to the test.

1. This week the famous tent is in Rotterdam, a city with very specific rules about banning cars

2. Off to Marrakech, where the Mazda MX-5 Miata meets the Zenos E10

The latter is a single-purpose toy, whereas Richard argues the former, the world’s best-selling roadster of all time, is a lot more diverse in its purpose. Or, as he puts it: “Mazda has invented a football boot that you can wear to the opera.”

3. And then there was an Italian to confuse things

It’s Jeremy in an Alfa Romeo 4C Spider, something he describes as his, “favorite car on sale today.” Yet he then somehow finds time to list off half a dozen faults with the car.

4.  What a surprise, a race breaks out

Give the boys a straight bit of road in the desert and some hot cars and it’s inevitable. What’s a bigger surprise is who actually wins this drag race.

5. There’s even better automotive news out of Rotterdam

The Dutch may have the best police cars in the world. Need a high-speed pursuit vehicle? Don’t get a big sedan like American cops. Try a Porsche 911 Targa on for size instead.

6. James and Richard settle in for a relaxing game of Battleship

Erm, except on a huge scale. With the ships represented by junked stretched limos, busted caravans, used-up Prius hybrids, and of course, old PT Cruisers. Think anyone will miss any of those after a few rounds of destruction?

But on the plus side, there’s one fewer PT Cruiser on the planet.

The Grand Tour and celebrities. Typically, a winning combination, yet this time, things go a bit sideways.

9. Anyway, back to sports cars in Morocco

It’s important to know just how light your lightweight sports car is, so Jeremy sets about building a low-tech, all-natural, locally-sourced, and totally renewable scale.

10. And finally, there’s a track that isn’t the Eboladrome

Imagine finding an abandoned film set in the desert. Imagine turning it into your own private race track. The Grand Tour boys need imagine no more.