BMW X7 spied on the open road in Germany 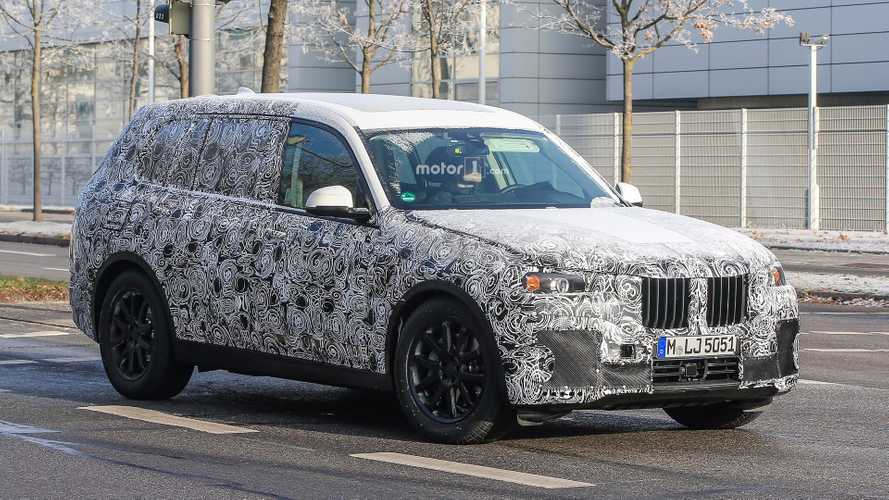 It's like an X5 but a whole lot larger.

BMW has been caught testing the X7 on the road in Germany. The fresh shots offer a better look at the three-row SUV’s ample size than the last set of it in transport.

After seeing recent spy photos of the upcoming X5, it’s clear that BMW is pursuing a similar design for the two crossovers. The X7 takes cues from the smaller CUV, but the designers make everything bigger. Even through the camouflage, we see a large interpretation of the brand’s kidney grille and broad intakes in the lower fascia. The hood wraps down over the front end. In profile, the three-row crossover reveals its boxy silhouette with a short overhang at the nose. The rear section appears to have plenty of room for housing the third row of seats and swallowing cargo. The tailgate looks quite tall, and the stylists tuck a pair of quadrilateral tailpipes into the fascia.

The X7 rides on a version of BMW’s CLAR platform that also underpins the latest 5 and 7 Series. Customers should have a wide variety of engine options six- and eight-cylinder powerplants, a plug-in hybrid, and a range-topping V12. There are even rumors of an M variant. While rear-wheel drive would likely be available, expect most X7s on the road to use the xDrive all-wheel-drive system.

BMW will build the X7 for the 2018 model year at its Spartanburg, South Carolina, factory. Prices in the United Kingdom would reportedly start around 70,000 pounds ($87,250 at current exchange rates), but building the model in America could allow for a starting price around $70,000 there, which would be competitive with other three-row premium competitors. The cost of the top trims like those with the V12 would likely reach into the six figures because a BMW exec already confirms an ultra-luxury trim in the lineup.