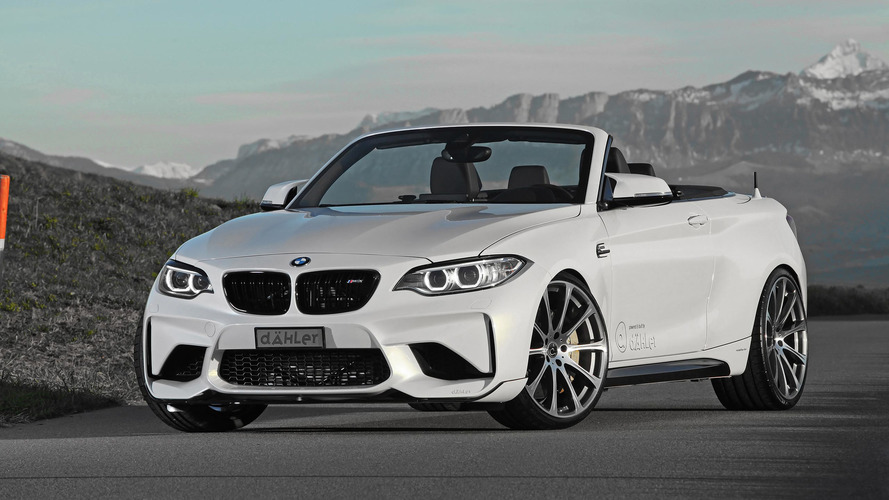 The tuner pushes the output to up to 419 hp, which is even more than the factory M2 coupe.

BMW is never going to build an M2 Convertible because the brand’s execs think the coupe is too hardcore to make a good droptop, but the Swiss tuning firm Dähler Design and Technik is happy to fill the demand.  The company’s creation looks good enough to come straight from the Bavarian automaker’s factory.

Dähler doesn’t go into detail about how the conversion works, but the body suggests that the company isn’t hacking up authentic M2s. Instead, it appears the firm is taking the existing 2 Series Convertible and using the droptop as a base for further performance modifications.

The tuned engine should sound good because Dähler installs a custom stainless steel exhaust. The system includes a pair of dark tips that come out of each corner of the rear.

To keep this performance under control, Dähler offers eight-piston brakes calipers with 15.75-inch (400-millimeter) rotors.  The company’s M2 Convertible rides on an adjustable coil-over suspension with 16 levels of independent customization for the rebound and compression.

The interior remains largely stock, except for Dähler’s MID-display-unit that replaces the center HVAC vent on the driver’s side. The little screen shows performance information like the water and oil temperatures.

Dähler Design & Technik GmbH in Belp near Bern in Switzerland made the dream come true
by introducing its own build up M2 Convertible «dÄHLer competition line». This vehicle is unique and demonstrates the innovation and technical competence of the enterprise in a very impressive way. It's just BMW-individualization at its highest level.

Not just an idea. But reality and a specific product!
During the year Dähler planned a complete M2 series. Now they have finished it with the exclusive M2 Convertible «dÄHLer competition line». And the result is very respectable (and of course ready to drive!). The familiar «dÄHLer-Touch» comes with the usual technical-harmonious and provable manner.

The setup and specific individualization for the M2 Convertible «dÄHLer competition line» includes a performance increase of the N55 engine from 408 up to 425 PS, a coil-over suspension system, a high-performance brake unit, a stainless steel exhaust system, wheels/tires, aerodynamics and style as well as the interior.

It is not just about the performance why Dähler Design & Technik GmbH improved the power of the basis aggregates (370 HP/465 ft-lb of torque plus 35 ft-lb of torque overboost). As a matter of fact, the main focus for Christoph Dähler and his team is the smooth interaction of many different parts as well as the harmonious totality of the M2 convertible project. Finally, the drive-ability decides the individual alignment of each vehicle. The completely new constructed and individualized vehicle has to be reliable and verifiable. Altogether the M2 convertible «dÄHLer competition line» presents the logical continuation of the entire Dähler M2 series. Because of their decades-long experience, the experts in Belp near Bern understands these complex interactions of all components very well.

The core is the performance update, available on two different levels:

And level 2 is even more promising: 425 PS (= 312 kW) are supporting the installed N55 engine and provides 610 ft-lb of torque. The maximum speed amounts to almost 300 km/h.
With the EU-/CH permission all variants accomplish the Euro-6-norm. The emission performance remains the same as the original series.

The stainless steel exhaust system - also «built by dÄHLer» - completes the performance increase packages excellence by providing a distinctive acoustic and the typical sporty-sonorous dÄHLer sound – but without being intrusive or affecting the outstanding original emission values. For the M2 Convertible various parts are available as well: stainless steel rear silencer, arbitrarily extendable up to a complete (stainless steel) system with a special catalytic converter system.

Performance suspension coil-over system for the M2 Convertible
In order to reach an additional and striking increase of agility, a perfectly aligned performance coil-over suspension system «built by dÄHLer» is used. The sporty-tight (but never hard!) suspension system offers a lowering and a 16 level rebound and compression stage (each level can be adjusted separately and independently of one another). As it offers almost countless different adjustments, the M2 Convertible can be optimally adjusted to any road condition(s) and to the personal preferences of the driver.

High-performance brake system, aerodynamic, MID, interior
Upon request we install our well-proven 8-pistons-high-performance-brake-system «built by dÄHLer» with massive 400 millimeter brake discs. In order to improve the aerodynamics, a spoiler lip with lateral flaps goes into action. The MID-display-unit in the cockpit provides additional information and adds the perfect touch to the performance related individualized program.
Following the customer's request, the interior can receive an according makeover with the certain «dÄHLer-Touch».

And – last, but not least
We would be delighted to implant an M4-engine (S55) in our M2 Convertible, just in case the pure enjoyment of fresh air in combination with even more understatement is desired...