Is this the Alfa Romeo Giulia wagon? [UPDATE] 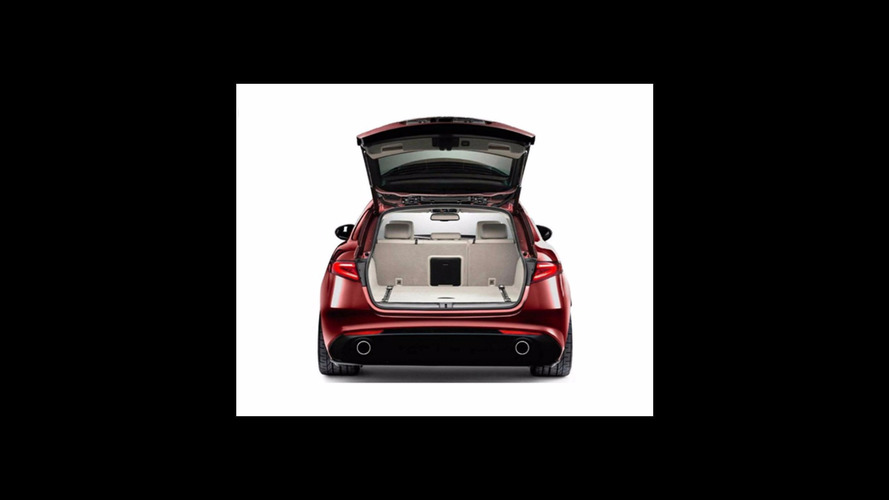 An image of the upcoming roomy Alfa with the tailgate open has been leaked online.

UPDATE: Auto Evolution has run a comparison of this image alongside the same view of the Jaguar XF Sportbrake, pointing out a number of similarities. Take a look here and decide for yourself.

An image of the upcoming Alfa Romeo Giulia wagon with its tailgate up has been allegedly leaked online.

The trunk is clearly on view, complete with loading rails, ski hatch, and 60/40 split-folding rear seats. But what the rear of car the actually looks like isn’t clear.

As you would expect of a sedan-based wagon, the rear quarters are shared, as is the rear bumper, twin exhaust outlets, and diffuser. The C-pillars appear quite sharply raked, and the tailgate features a pronounced curve, suggesting the stylists aimed to make the wagon sporty and rakish, rather than try to stuff in as much cargo space as possible.

Motor1 recently posted this speculative rendering of the Giulia wagon. On the face of it, it compares well with the leaked image.

According to Autocar, it is thought the Giulia wagon will adopt the Sportwagon tag Alfa has been applying to its wagons for more than 30 years.

Even though fast wagons like the Audi RS4 and Mercedes-AMG C63 do good business, the Giulia wagon is not expected to be available in 505 horsepower Quadrifoglio form. Otherwise, engine choices will likely mirror the range of four-cylinder, turbocharged gas and diesel engines used in the sedan.

Despite the booming popularity of SUVs and crossovers decimating sales of wagons across much of the world, they remain highly relevant in Europe. In the Giulia’s premium mid-size sector, wagons account for 42 percent of European sales, according to JATO Dynamics analyst Felipe Munoz.

With that big a chunk of sales at stake, it would be extremely foolhardy of Alfa Romeo not to launch a Giulia wagon, as it tries to compete on an equal footing with the Audi A4 Avant, BMW 3 Series, and Mercedes C Class. Witness the sedan-only Jaguar XE, which is struggling against the big-selling Germans in Europe.

Unfortunately, wagon sales have dwindled to almost zero in the United States, so it is highly unlikely the Giulia wagon will make its way across the Atlantic. An unveiling at the Geneva motor show in March is anticipated.