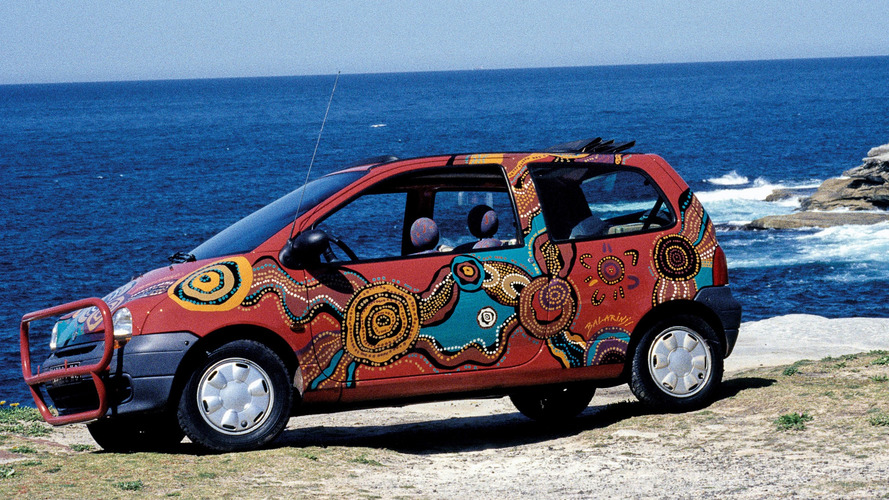 It now belongs to the National Museum of Australia in Canberra.

It was only a couple of days ago when Renault unveiled the one-off Kwid art car and now the company with the diamond logo has decided to revisit an old friend also with an artsy livery. It’s a one-of-a-kind 1994 Twingo “Balarinji” driven by French journalist Jean Dulon during a road trip in Australia on an epic 25,000-km journey, which also included driving on unsealed roads and tracks for approximately 8,000 km. It was actually the very first two-wheel-drive car to reach the Cape York Peninsula, the northernmost tip of Australia.

Once the trip was over, Jean Dulon got in touch with two well-known Australian artists to immortalize his outback adventure before heading back home to France. The first-gen Twingo received a unique Aboriginal artwork signed by John Moriatry, founder of the designer clothing company Balarinji, and also by Frank Lee, a popular airbrush artist.

Jean Dulon had the car featured in a film that aired on local TV, while Renault borrowed the special Twingo to use it in a nationwide ad campaign with the motto: “The Twingo is like a boomerang. No matter how far you send it, it keeps on coming back.”

The cute city car wasn’t retired after its trip to Australia as Jean continued to drive it in France over the years, managing to rack up 250,000 km (155,342 miles). The car has recently found a new home at the National Museum of Australia in Canberra, with Renault saying that now it’s basically a “national treasure.”

The original Twingo made its debut back in September 1992 at the Paris Motor Show and was effectively launched in Europe in 1993. It served as a replacement for the Renault 4 and was available until June 2007 when it was replaced by the second-gen model. While the first two had the engine in the front sending power to the front axle, the current Twingo, which has been around since 2014, has the engine mounted at the back and it drives the rear wheels.

The TWINGO makes history in Australia

The story began over 20 years ago when French journalist Jean DULON set off on a road trip around Australia in a TWINGO.

That was back in 1994. The TWINGO had just been released and was shaking up the car market. Jean was inspired by the car’s slogan: “The Renault ad at the time was all about inventing a life style to match the TWINGO’s character. I took the slogan word for word and asked Renault if I could invent an adventure for the TWINGO. I wanted to create an encounter between something infinitely small like the TWINGO and something infinitely big like Australia.”

Jean ended up travelling 25,000 kilometres, including 8,000 kilometres on unsealed roads and tracks, on his two-month journey around Australia. The TWINGO was the first two-wheel drive car to reach the Cape York Peninsula, the northernmost tip of Australia. Jean had no GPS or roadside assistance and service stations were hundreds of kilometres apart in some remote areas.

Before going back to France, Jean asked two famous Australian artists to immortalise his outback adventure. The Aboriginal artwork painted on his one-of-a-kind TWINGO was the brainchild of John MORIARTY, founder of the leading Australian designer clothing company Balarinji, and Frank LEE, a celebrated airbrush artist.

You may already be familiar with this TWINGO. Jean DULON made a film about his trip and stories about the TWINGO featured in the mainstream media and on TV. Renault also used a picture of the Aboriginal-inspired TWINGO in 1985 for a nationwide ad campaign with the tagline: ‘The TWINGO is like a boomerang. No matter how far you send it, it keeps on coming back’.

Back in France, Jean continued to relive his outback adventure in his TWINGO ‘Balarinji’, clocking up 250,000 kilometres over the years. The car has recently been acquired by the National Museum of Australia in Canberra and has practically become a national treasure.