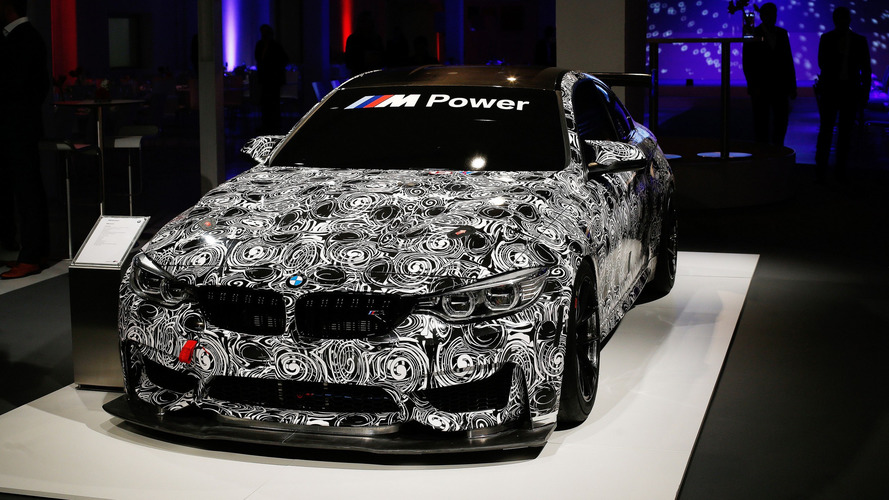 Scheduled to make its racing debut in January 2018 at the 24 Hours of Dubai.

BMW had on display at its annual Season Review event organized in Munich, Germany an M4 GT4 test and development car covered in the now familiar camouflage with a swirly pattern to conceal the design. Announced towards the end of July, the GT4-spec M4 Coupe will slot above BMW Motorsport’s entry-level M235i Racing of which a total of 170 examples have been built since the model’s introduction at the beginning of 2014.

The track-only M4 GT4 will utilize the same carbon fiber hood installed on the sold-out M4 GTS special edition, while the doors are going to be manufactured from the same material to shave off more weight. It’s also going to be fitted with a race-spec exhaust system and will come with a bespoke front splitter and rear wing to aid downforce at both axles.

Images of the stripped-out cabin have not been published so far, but BMW Motorsport says the M4 GT4 will borrow the seats, brakes, and the pedal box from its bigger brother, the M6 GT3.

A successor of the M3 GT4, the new track machine will be able to compete in a wide array of racing series from all over the world where GT4-spec cars are eligible to take part.

“Our international customers have celebrated many triumphs in the first year with the BMW M6 GT3. We hope this will continue in 2017. The comprehensive test programme with the BMW M4 GT4 will go on in parallel. We will also see the car in action in a couple of races. Our privateer teams will then compete with the newest model from our product range in 2018.”

BMW’s new race car will embark upon an extensive testing program in 2017 ahead of its official racing debut scheduled for January 2018 at the 24 Hours of Dubai in United Arab Emirates where a test is scheduled to take place next month. Customer deliveries are programmed to begin in the second half of next year.

With the BMW M6 GT3 spearheading the product range for privateer teams and drivers, BMW Motorsport will be getting a new challenger ready over the course of the 2017 season: the BMW M4 GT4. With this car, customers will be able to race cost-effectively at the very highest level at events around the world from 2018. Numerous test events are scheduled throughout the 2017 season, including the 24-hour race in Dubai (UA) in January. Drivers and teams around the world will continue to compete with the current entry-level model, the BMW M235i Racing, in such competitions as the BMW M235i Racing Cup classes in Germany, Belgium and China. A total of 170 examples of the BMW M235i Racing have been built.