Is this what Holden's Supercars racing future looks like? 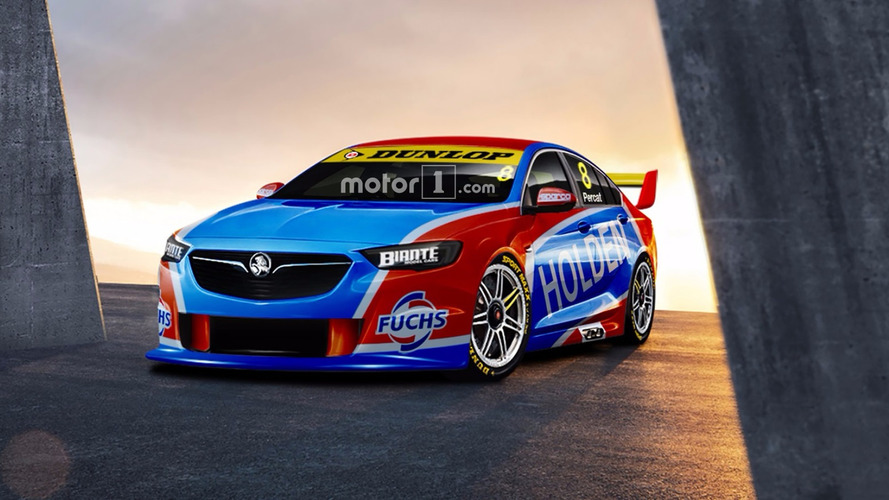 The Opel Insignia-based 2018 Holden Commodore has been reimagined as a touring car racer.

This is the 2018 Holden Commodore, reimagined in full Supercars trim.

The ‘18 Commodore is a rebadged version of the new, front-wheel-drive, German-built Opel Insignia Grand Sport, revealed last week. It’s a radical departure for General Motors’ Australian outpost, being the first imported car to bear the Commodore name, and the first to use a front-wheel-drive chassis. Engine choices include four-cylinder gas and diesel motors, and a high-performance V6. But no V8. Much to the chagrin of Australian muscle car fans.

As the Commodore is being revolutionized, so is Australia’s premier racing series, the Supercars Championship. Since the mid-1990s, the series has featured V8-engined, rear-wheel-drive, four-door touring cars. The Holden Commodore and its nemesis, the Ford Falcon, have dominated ever since. But as both have reached the end of their lives, to be replaced by the Insignia and Fusion/Mondeo, Supercars’ organisers saw the need to change with the times.

From 2017, the series will be open to a broader range of bodystyle and engine configurations. The cars will remain front-engined, rear-wheel-drive four-seaters, but turbocharged four- and six-cylinder engines will be allowed alongside the existing V8s. As will two-door bodyshells.

Every car will use the same proprietary set of chassis components as the current machinery, allowing cars like the ‘18 Commodore that are only sold with front-drive to be converted to rear-drive.

Supercars is also abandoning its V8 Utes category for 2017, as the Commodore and Falcon-based pickups used have also reached the end of the road. It will be replaced by the new SuperUtes category, which caters to turbo diesel-powered, crew cab trucks like the Toyota Hilux and Nissan Navara.

A number of teams will continue racing the V8 Commodore during 2017. Factory team contractor Triple Eight Race Engineering has already started work on the ‘18 Commodore, which will be powered by a turbo V6.

Ford is reportedly considering switching to the Mustang for 2018.