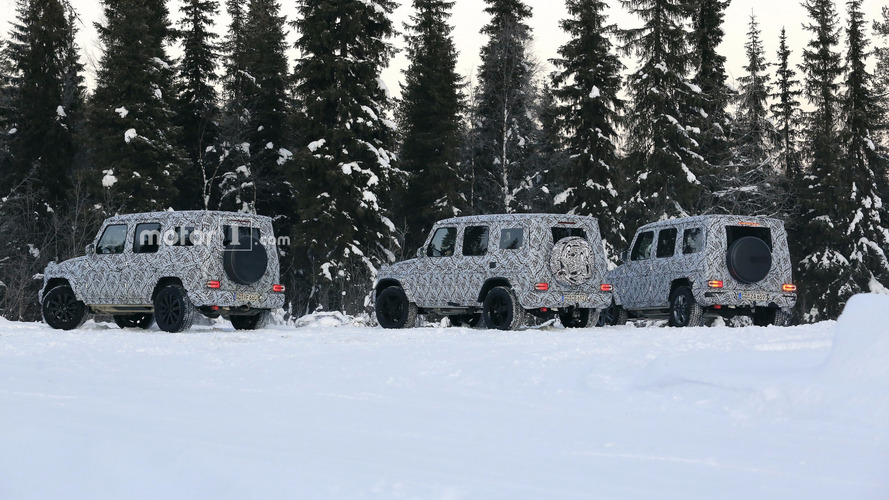 The venerable off roader looks virtually the same on the outside, but there are some big changes underneath that swirly camo. Some would say it’s about time taking into account the G-Class is the oldest model in Mercedes’ lineup, stretching back to the late 1970. That being said, we should point out it has received several updates during this interval, with the most important one being in 1990 when the W463 generation came out. An overhaul is currently in the works and we have the spy images to prove it, with both the regular G-Class and its range-topping G63 companion spotted undergoing winter testing.

While the shape is going to be as boxy as ever, rumor has it Mercedes has plans to increase width by around four inches (10 centimeters), which will obviously pay dividends in terms of space inside the cabin where we are also expecting a digital dashboard. Even though it will be bigger, switching to modern underpinnings will allow the G-Wagen to lose as much as 882 pounds (400 kilograms) if we were to rely on the rumor mill. That will boost not only efficiency and handling, but also performance.

Speaking of which, the G63 will wave goodbye to the biturbo 5.5-liter engine to make room for Mercedes-AMG’s biturbo 4.0-liter V8. It’s unclear at this point how much power it will have, but we do know the eight-cylinder engine is already available in different states of tune. Its output ranges from 470 horsepower (350 kilowatts) and 480 pound-feet (650 Newton-meters of torque) inside the C63 to a massive 603 hp (450 kW) and 627 lb-ft (850 Nm) in the new E63 S. If we were to make a wager, the next G63’s power will be closer to the E63 rather than the C63. Regardless of how much punch it will pack underneath the hood, it’s going to be delivered to both axles through a nine-speed automatic transmission.

Expect the regular G-Class to be unveiled in the second half of 2017, with the icing-on-the-cake G63 to bow likely in the first part of 2018. Production will continue to be the responsibility of contractor Magna Steyr at its factory in Graz, Austria where the 20,000th G-Class built in 2016 recently rolled off the assembly line.