Renault Kwid art car is an expression of Gesturism 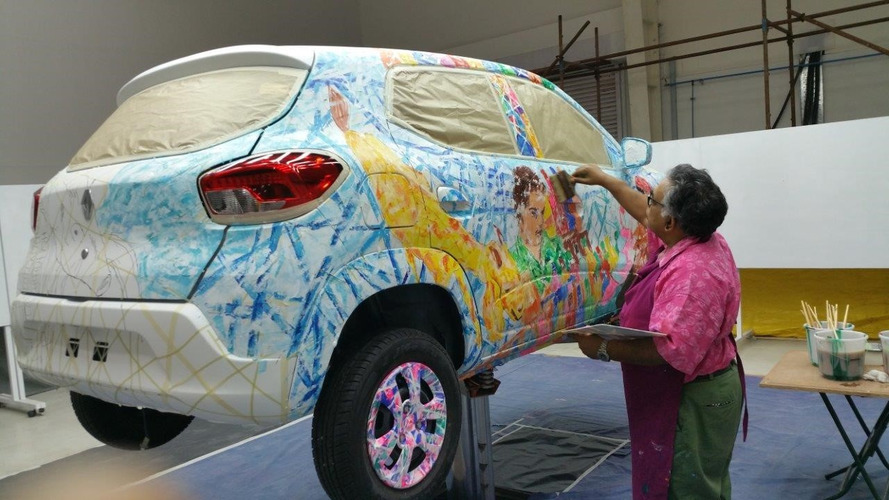 Most art cars are BMWs, but this one is a much more humble Renault.

To be brutally honest, I had no idea there was such a thing as “Gesturism.” It’s a movement started by Sen Shombit, a French artist of Indian origin, described by the author as being a “creative celebration of the limitless gestures of all living beings, from birth to death.” He goes on to specify the car featured here “is a form of dialogue between painting and design, between art and technology and between the artist himself and Renault.”

The 62-year-old artist was asked by Renault India to elaborate his personal take on the pint-sized Kwid for an exhibition called “Désordre” that will run until December 27th in Barbizon, which is located about 60-km south of Paris.

In the words of Renault:

“It is the first time an artist has expressed a narrative through his own style in the form of an art car, in contrast to earlier art cars by celebrated artists like Lichtenstein, Warhol, Koons and Calder which showcased the artists’ personal styles.”

The main market for the Chennai-built Kwid is India, but Renault has already announced starting with 2017 it will export the tiny crossover to Brazil. A launch in Europe is not being considered for the moment, but Renault’s budget arm Dacia through the voice of its Commercial Director, Francois Mariotte, told JournalAuto last month “never say never.”

The chances of seeing the Kwid on the old continent are slim since the model would have to be overhauled in order to meet the significantly more stringent safety regulations. After all, the original version of the Kwid “scored” a zero star-rating in Global NCAP crash tests in May, while an improved model managed to earn one star in September.

But there’s another reason why a Dacia-badged Kwid might not be suitable for Europe as there is a risk it could cannibalize sales of the Dacia Sandero Stepway.

As for this colorful art car, it will obviously remain strictly as a one-off.

A Kwid Art Car is to be one of the stars of a new exhibition that will run in Barbizon, 60km south of Paris, France, from December 10 to 27, 2016. The exhibition, entitled Désordre [Disorder], will feature the works of Sen Shombit, a French artist of Indian origin who was approached by Renault to create a personal take on the Renault Kwid, a flagship model of the brand in India.

Sen Shombit applied the principles of his own movement – Gesturism – to create an art car in the style of his Ville Enigmatique [Enigmatic City] theme. In the words of the artist, the car is a form of dialogue between painting and design, between art and technology and between the artist himself and Renault.

The painting was done at Renault’s Design Center in Chennai, India.

“We were delighted when Sen accepted our invitation to paint a Kwid. It is the first time an artist has expressed a narrative through his own style in the form of an art car, in contrast to earlier art cars by celebrated artists like Lichtenstein, Warhol, Koons and Calder which showcased the artists’ personal styles. I am fascinated by the bi-cultural side of Sen’s work. The Kwid Art Car eloquently mirrors his French and Indian inspiration thanks to the pallete seen in his Ville Enigmatique work where he juxtaposes historical French and Victorian Bengal alongside the traditional lives of Bengalis today.”

The Kwid Art Car was displayed for the first time on November 9, 2016, at Sen Shombit’s exhibition in Kala Ghoda, the famous artists’ quarter in southern Mumbai.

The Désordre exhibition will run from December 10 to 27, 2016, at Barbizon’s Espace Culturel Marc Jacquet. The official opening ceremony at 4pm on Saturday, December 10, will be attended by Jack Lang (President of the Arab World Institute, Paris, and former French government minister) and Patrick Lecharpy (VP, Design R&D, Renault).

Sen Shombit was born in Calcutta, India, in 1954. In 1973, he moved to Paris, France, where he studied at the Ecole Nationale des Beaux-Arts and at the Académie Julian before embarking on an international career in brand and industrial design. In 1994, Sen Shombit founded the Gesturism movement whereby life is given to works by gestures and not by movement.