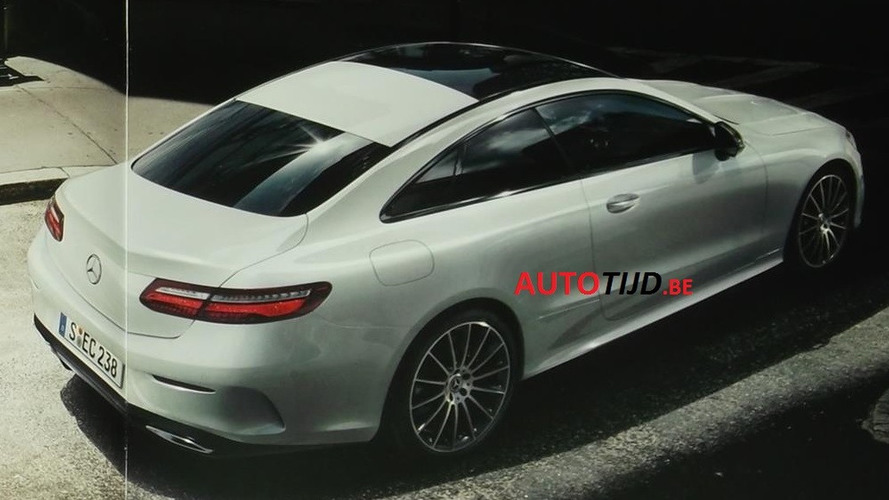 You weren't supposed to see it until Wednesday.

Hot on the heels of yesterday’s teaser video, an official brochure of the 2018 Mercedes E-Class Coupe (C238) has emerged onto the web via Belgian website AutoTijd and in some of the images we are able to see the very same white car. In addition, the Avantgarde and AMG Line are also featured, with the latter featuring a sportier body kit with a diamond-studded front grille and a set of 19-inch alloy wheels. The small third-side window we’ve mentioned in yesterday’s article is clearly visible, so Mercedes was indeed trying to hide it on its camouflaged prototypes.

The interior cabin is derived from the E-Class Sedan, but there’s a different design for the air vents along with new front seats. The dual 12.3-inch digital screens and the 23-speaker Burmester sound system are mentioned in the brochure, as is the Dynamic Select allowing the driver to choose from multiple settings of the air suspension.

We are also able to learn the E400 4Matic will be available upon launch with a biturbo 3.0-liter V6 delivering 329 horsepower (245 kilowatts) and 354 pound-feet (480 Newton-meters) of torque through Mercedes’ silky smooth nine-speed automatic transmission. It will allow the midsize premium coupe reach 62 mph (100 kph) in 5.3 seconds and hit an electronically-capped 155 mph (250 kph).

Mercedes will take the virtual wraps off the 2018 E-Class Coupe on December 14 and will have it on display in Detroit at NAIAS next month. It’s going to be followed probably in the latter part of 2017 by the E-Class Cabriolet.

Special thanks go to Peter for sending us the tip!