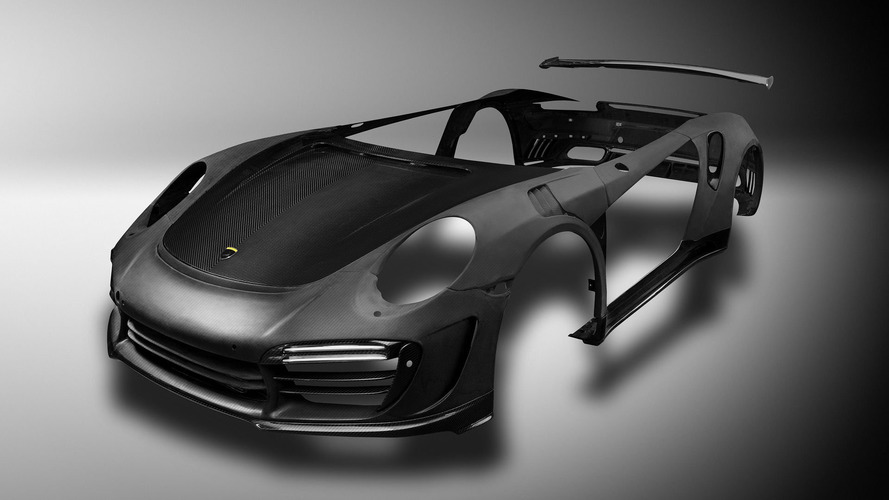 Optional parts even give the Turbo fenders that look like the 911 GT3 RS.

Carbon fiber can shed weight off a vehicle, but companies can also use the high-tech material to scuplt a whole new body. While many tuners simply offer a few pieces for replacing the front or rear bumper, the Russian firm TopCar has a set that swaps out practically every panel on the facelifted Porsche 911 Turbo and Turbo S for a carbon fiber part.

TopCar’s Stinger GTR generation 2 kit for the revised Turbo replaces the stock panels for carbon fiber replacements on the bumpers, fenders, hood, side skirts, upper portion of the door, and rear spoiler. The package also includes smaller pieces for updating the air ducts and grilles. Optional parts give the Porsche gills above the front wheels like the 911 GT3 RS. Customers can order the pieces pre-painted in their car’s body color for an extra fee, too.

Unfortunately, TopCar doesn’t tell us how much weight these replacement parts save. So much carbon fiber should remove some pounds over the standard metal panels, though. Presently, the Turbo weighs 3,516 pounds (1,595 kilograms), and the Turbo S is 3,527 pounds (1,600 kg).

TopCar is now working on a similar kit for the 911 Turbo Cabriolet, which shouldn’t be too hard for the firm because of the model’s similarity to the coupe. The carbon-fiber-bodied droptop will debut next year at the Geneva Motor Show.

Porsche is already developing a hotter 911 Turbo of its own by working on the next-gen GT2 RS. It uses a similar body as the GT3 RS but with a new rear bumper for dealing with the powerplant’s copious heat. The engine could reportedly have around 700 horsepower (522 kilowatts).

CARBON FIBER BODY
TopCar company manufactures sophisticated carbon fiber components since its foundation in 2004. Several years later, the company's specialists have started to make the whole carbon fiber body's for the cars - very- sophisticated aerodynamic body kits with a GTR index. It is a fact that the
number of elements of body kit is so large that they constitute a new carbon body.

The most typical example - Stinger GTR gen. 2, kit for the Porsche 991 Turbo / Turbo S facelift. Indeed, this is a great list of elements: front and rear bumpers, front and rear fenders, hood, side skirts, wide moldings on the doors and rear spoiler. In addition, there are many small carbon elements - air ducts and grills.

Each element is made of carbon in a vacuum oven and constitutes an example of the highest quality. However, all these magnificent composite parts (in the final stage) are painted in the body color of the car. And only a few additional parts are finished in visible carbon with the beautiful carbon structure. An example of such a project - a black Porsche 991 Stinger GTR gen. 2, which has been specially made for a customer from the UK. On the right hand car has been installed complete set, painted in black color, with carbon detailing.

However, TopCar preparing a special project of the International Automobile Salon in Geneva 2017 - is completely "carbon" Porsche 991 Turbo S Cabrio. At this time, the car will be decorated by visible carbon fiber: bumpers, fenders, doors and all other elements.