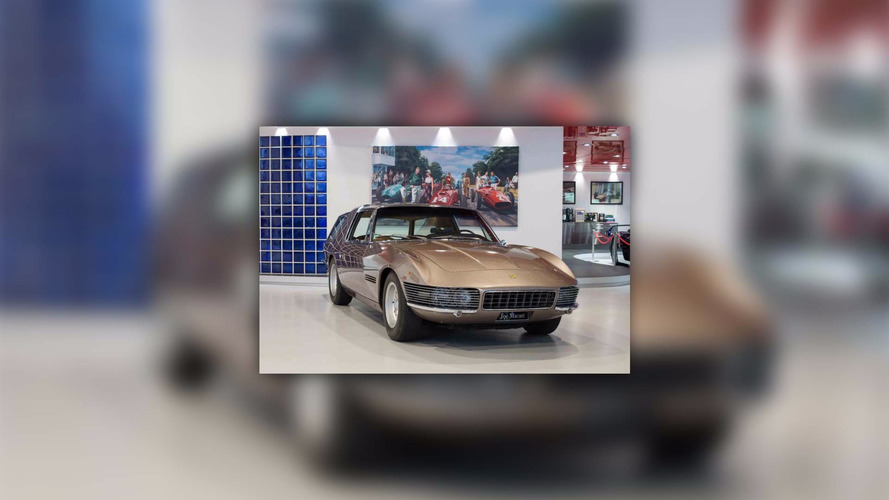 There is artistry in this Vignale-bodied shooting brake, but it is an acquired taste.

Ferrari launched its first “shooting brake” wagon in 2011. The V12-powered, four-wheel-drive FF followed the tried and tested recipe of putting a stylish yet practical body on a sporty chassis. Despite being well outside the Ferrari norm, the FF proved a huge success. So much so that it was given a comprehensive facelift earlier this year and renamed GTC4Lusso. Which is no less impenetrable than “FF."

Anyway, though the FF was the first one to be built at the factory, it was by no means the first Ferrari shooting brake. During the 1960s, a number of coachbuilders built wagons based on Ferrari underpinnings. Wagons like this one.

It started life in 1965 as a perfectly ordinary 330 GT. The model had been introduced the previous year as a replacement for both the 250 GTE and 330 America. It brought in a more rounded look than its decidedly angular predecessors and - slightly - more advanced engineering.

Under the hood was a thumping 4.0-liter V12 motor that produced a smooth, refined, and extremely effective 300 horsepower. Enough for a 0 to 60 miles per hour time of 6.3 seconds and a top speed on the far side of 150 mph.

Underneath the separate chassis were independent front suspension and a live rear axle – hardly cutting-edge, even in 1964. At least it had disc brakes all round.

This one was originally sold via New York-based Luigi Chinetti Motors to an owned named Desi. By 1967, it ended up with Luigi Chinetti Jr., a talented designer and stylist. Working with artist Bob Peak, he reimagined the 330 GT as a shooting brake.

Not a single body panel was left untouched. The sharply-pointed prow sweeps up over the front fenders, which blends into a crease running to the rear. And there are loads of neat little details, from the lights hidden behind grilles, to the way the B-pillar appears, roll hoop-like, to sit on top of the roof.

Italian coachbuilder Vignale built the body. The carrozzerie was among the most prolific Ferrari tailors through the 1950s, but this turned out to be the last “prancing horse” it worked on.

Is it beautiful? Well, there certainly is artistry in the design, but it is an acquired taste. It's a bit weird, in other words.