Since it was being benchmarked against a Golf R, one could speculate Renault is giving its hot hatch the AWD treatment.

The French & German dynamic duo was spotted getting a refill somewhere in Sweden and according to our spy photographers it wasn’t a coincidence. Renault was actually benchmarking the 2018 Megane RS against the all-paw Volkswagen Golf R, and these latest images come to fuel (pun intended) those rumors about the new range-topping Megane getting an all-wheel-drive setup. It remains to be seen whether it will actually happen since the company with the diamond logo hasn’t actually said anything about what would be a big transformation.

The best of both worlds would have to be offering the Megane RS with a standard FWD layout and also with the option of AWD. That being said, a Renault insider revealed a couple of months ago the new model will stick to its regular FWD setup, while another source within the company told Auto Express it will go AWD, so we don’t know what to believe at this point. Perhaps both? 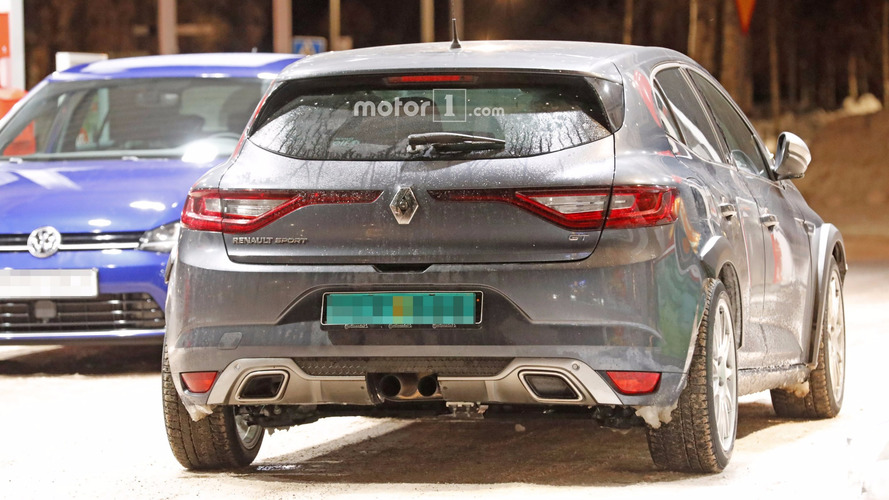 Just like on previous occasions, the vehicle spotted is actually a test mule based on the Megane GT, but with the dual tips mounted in the middle. As you can easily observe, the side exhaust finishers are in their regular place flanking the faux diffuser, but the actual tips are no longer there.

Another clue about the Megane RS going AWD might be found on those wheel arches where there are some grey plastic add-ons. Those could be a sign of extended tracks for the hot hatch, something that an AWD-equipped Megane RS might have.

Set to be offered only with five doors (unlike the previous three-door coupe-only model), the all-new Megane RS will allegedly feature a new turbocharged 2.0-liter gasoline engine. It will reportedly be linked exclusively to a six-speed manual transmission benefitting from rev-matching tech borrowed from the Nissan 370Z. A four-wheel steering setup will be offered as optional equipment, unlike on the aforementioned Megane GT where it’s standard and you can’t ask Renault to remove it.

Based on a leaked internal document published by automotive tipster Ferd, the next Megane RS is going to be launched in September 2017.