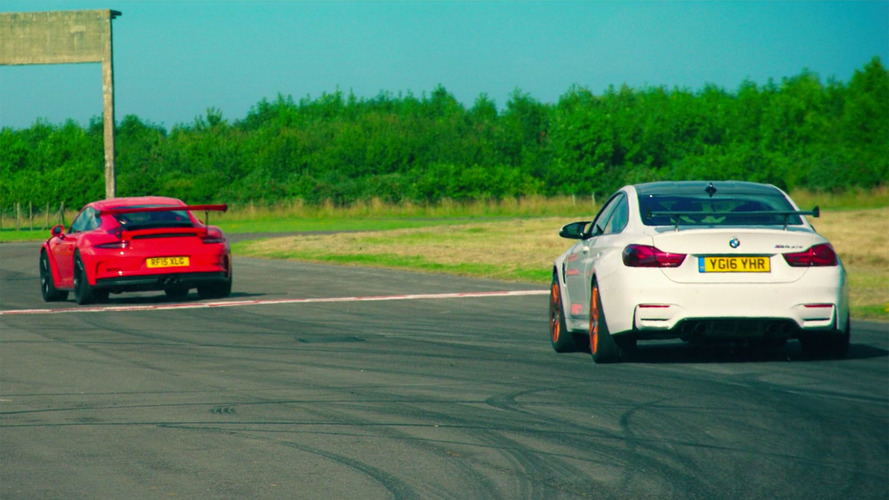 This week, the boys of The Grand Tour return to Whitby once again, the same location as last week’s episode, but as if to balance out their previous antics, the trio wants to investigate eco-friendly cars that might just help save the world. There’s still time, however, for some serious track battles and, of course, unexpected fires.

1. Jeremy Clarkson drives a car he’s not inclined to like

It’s the Porsche 911 GT3 RS, and he’s not too fond of them because, well, Richard Hammond has one. But once he gets behind the wheel of Porsche’s latest weapon, Clarkson begins to see the light. “Ooh it’s very, very good,” he admits. “Annoyingly.”

2. A challenger arrives, and a very German track battle ensues

It’s the BMW M4 GTS, a hardcore track variant of the sports coupe with an ultra-low splitter, water injection, and a distinct lack of interior storage space.

3. Two enter, only one is victorious

One of the German track monsters is grippy, fun, and communicative. The other’s a handful that really disappoints Clarkson. And it's two seconds slower around the track.

4. Hammond gets a bit confused about some traffic lights

More gender-inclusive crossing signals only lead to confusion for the easily confused boys. Who gets to cross the road when?

5. Say hello to the DIY eco-cars

Suppose you bash your car into a wall while parking and damage your bone bumpers. Good news: replacement parts are just a call to the butcher away – and you get a choice between pork and beef.

7. Hammond goes for a ride in an Audi TT

Could squeezing behind a car’s rear bumper be the next best way to smuggle across borders? Or, as Clarkson puts to the test, is it merely the next evolution in backup-sensor technology?

8. Like one of the Three Little Pigs, May’s built a house of bricks

When his mud car disintegrated, he set about using a more substantial building material for his environmentally sustainable vehicle. Shame he didn’t think to use enough mortar in between the bricks.

9. It wouldn’t be a car challenge without a race

At “The Inaugural Sustainable Living Motorsport Challenge on a Sustainable Track,” the trio’s recyclable and naturally sourced vehicles face off against a trio of outmoded, old-fashioned steel-and-plastic cars. How antiquated.

10. And, yes, something catches fire in spectacular fashion

It turns out that having a car made from branches sometimes means those branches get in close proximity to exhaust pipes. And when you’re racing around a field at full tilt, the exhaust gets hotter and hotter until the inevitable happens. Not so environmentally friendly anymore.