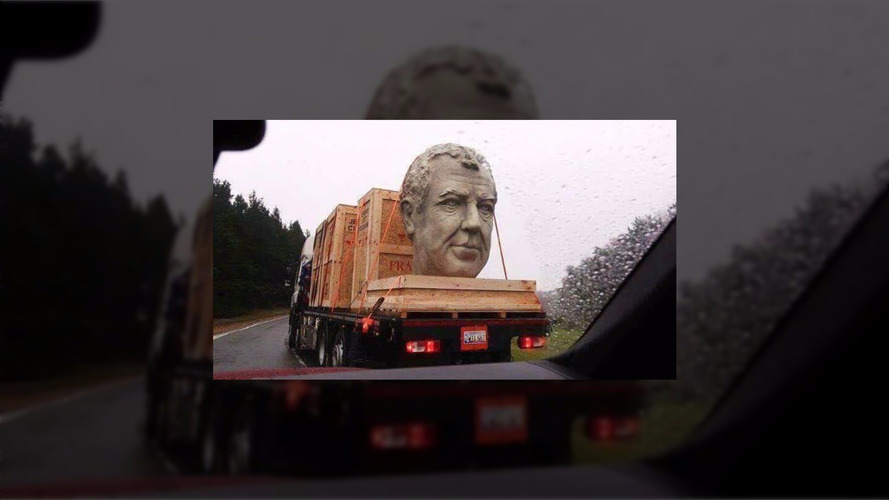 Is someone building a Clarkson monster, or is it another The Grand Tour stunt?

If you’re ever lucky enough to see Jeremy Clarkson in real life - and I have, several times - you will immediately be struck by the sheer size of his head. He is extremely tall, but even so his noggin is huge.

Not quite as big, though, as this monumental - and mildly terrifying - Clarkson head that has been spotted on the back of a truck traveling through Washington State. A number of motorists tweeted pictures of it.

James May inevitably got a jibe in.

Another tweet showed a close up view of the crates, one of which appears to be labeled “Jeremy crotch” - a phrase that could send shivers down even the most resolute of spines.

Then The Grand Tour’s own Twitter account put out an image showing a partially obscured James May head, and a sketch of the completed monument.

It isn’t known where the Clarkson, Hammond, and May colossi are heading - there has been speculation they will be erected at Amazon’s headquarters in Seattle.

Even the truck itself is the cause of confusion, as it is a not-sold-in-the-U.S. DAF CF. It even appears to be right-hand-drive, and therefore from the UK. And yet it carries an American license plate.

Let’s assume the statue was made in the UK. It could have been cheaper and easier to put a UK truck on roll-on-roll-off transport ship and get a temporary U.S. plate, than load the statue into a container and use two different trucking companies on opposite sides of the Atlantic to haul it. Or it could be a “bit” of some kind.

Whatever is going on here, it’s sure to be awesome. And kind of scary. Personally, I will always be convinced that the statues will get struck by lightning and turn into rampaging monsters that make pithy quips as they tear buildings down.