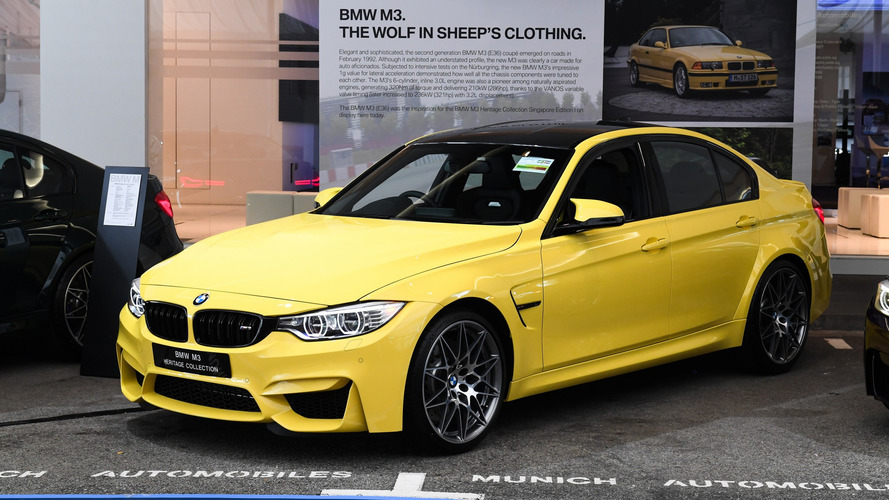 A splash of color on the outside combined with more power under the hood and laser engraving on the inside.

BMW has been in a festive mood all year as not only are the Bavarians celebrating their centenary, but 2016 also marks the 30th anniversary of the legendary M3. The high-performance compact sedan has already received a special edition “30 Jahre M3” in Europe and United States as a nod to its three-decade existence, and now BMW has prepared a similar variant called “Heritage Collection” exclusively for Singapore.

A total of 10 cars are heading to the Little Red Dot where BMW will sell them only with Daytona Violet Metallic, Dakar Yellow II, and British Racing Green paints. All of them will feature as standard equipment the Competition Package, so the turbocharged 3.0-liter six-cylinder engine will be dialed to 450 horsepower (335 kilowatts) and 405 pound-feet (550 Newton-meters) of torque delivered to the road via a seven-speed, dual-clutch gearbox. That will be enough to cover the 0-62 mph (0-100 kph) in a brisk four seconds and max out at an electronically-governed 155 mph (250 kph).

Known by its full name as the “BMW M3 Heritage Collection Singapore Edition I,” the limited-run model will pack an assortment of other upgrades over the standard M3. These include the 20-inch M alloys, a black chrome finish for the exhaust tips, along with the high-gloss Shadow Line exterior trim from the BMW Individual catalog.

To spice things up even further, the interior cabin is home a set of body-hugging lightweight front seats and there’s also laser engraving on the carbon fiber trim denoting the car’s name and its limited availability status, just in case the owner will forget he’s not driving a bone-stock M3.

The special-edition M3 Sedan is already available in Singapore and BMW is asking S$408,800.