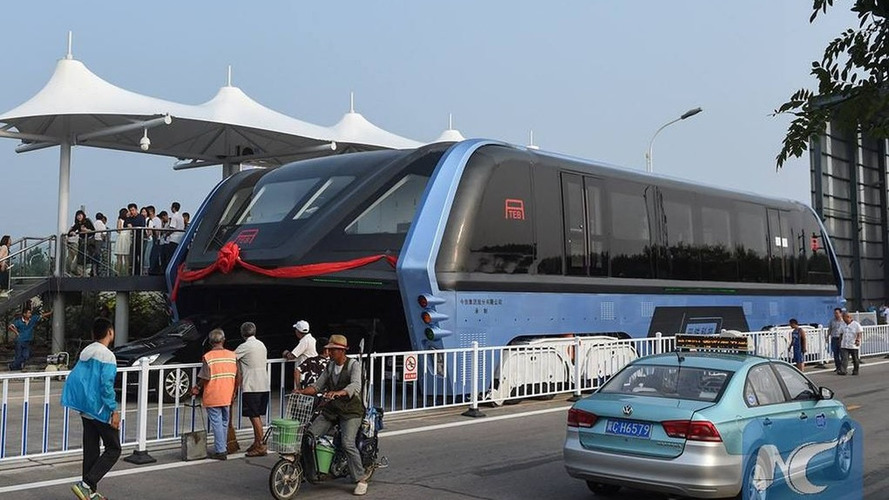 What was once the gleaming future of public transport is now a huge, rotting eyesore.

Remember the “straddling bus”, that gleaming blue vision of the future of urban transportation? Well, just a few short months after it debuted to massive fanfare, it lies abandoned.

According to the Shanghaiist, the straddling bus is rotting away in a shed at its testing site in Qinhuangdao, with only a couple of security guards for company. Apparently, the bus hasn’t moved in months.

It was only August that the Transport Elevated Bus - to use its official name - had its first public “test” in front of the world’s media. The test was conducted on a 1,000 feet (300 meter) stretch of public road that the company had rented off the city of Qinhuangdao.

On paper, at least, it seemed like a brilliant idea: a high-capacity public transport vehicle capable of passing over the top of two lanes of traffic. The result would be more road space and quicker journey times.

But the problems soon became clear. The TEB ran on rails for a start, which technically made it a tram. There was less than seven feet (2.1 meters) of clearance under the “hull”, when Chinese regulations allow vehicles of nearly 14 feet (4.2 meters) on the road. It could only run in a straight line. It was extremely heavy. And there wasn’t any obvious means of escape in an emergency.

There were some reports the prototype was rather shoddily built, too. And it actually ran on tires guided by gutters, not on rails. Worse came, though, when a number of Chinese media outlets alleged that whole thing was actually a giant scam. Investors got cold feet and pulled out.

After that first test, locals were invited to witness another a few weeks later. But since then, the TEB has sat in its shed. To add insult to injury, the company extended its lease on the test track, which takes up half a road, for another year. So the locals are stuck with a huge, inconvenient eyesore until at least the end of August in 2017.

Gallery: China's traffic-straddling bus is now a real thing, and it's huge