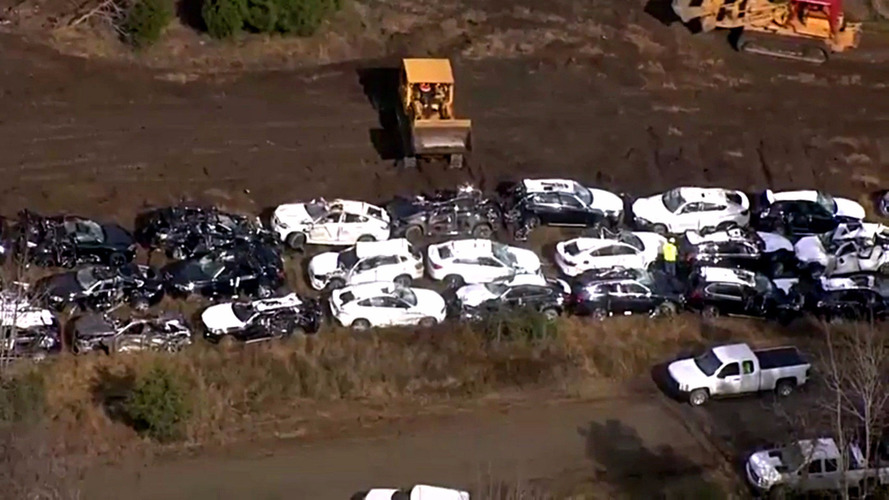 They had barely left the factory when the train carrying them derailed in South Carolina.

Here’s a sight that will sadden any gearhead: dozens of brand-new BMWs that have been completely destroyed in a train crash, just a few miles from the factory.

The cars were being transported by train from BMW’s factory in Spartanburg, South Carolina to the Port of Charleston, where they would be loaded onto a ship for export to overseas markets. But they only got about 60 miles down the tracks when the train derailed near the small town of Blair.

According to Automotive News, BMW said the train was loaded with X3, X4, X5, and X6 cars - every model built at Spartanburg, in other words. The 12-car train was carrying a total of 120 cars.

There are conflicting reports as to how many cars were damaged in the accident. AN reports that all 120 were, while other outlets have put the number at 97. As you can see in the video below, the clear-up crew isn’t being gentle about removing the cars from the train.

It seems likely that most, if not all, will ultimately have to be thrown in a shredder.

BMW said in a statement: “BMW personnel are traveling to the scene and will assess the damage to these 120 BMWs. We will continue to work with Norfolk Southern in this situation to assess the damages.”

Two Norfolk Southern locomotives were pulling the train. The two-man crew escaped without injury, the company said. It isn’t yet known why the derailment occurred.

The crash will no doubt be extremely expensive for BMW, Norfolk Southern, and their insurance carriers. But I feel sorry for the buyers of the cars involved. They will have been looking forward so much to the arrival of their shiny new BMW, only to get a phone call from the dealer telling them their pride and joy is lying smashed up at the side of a rail track in the middle of nowhere. It would be upsetting and fristrating for anyone, I think.