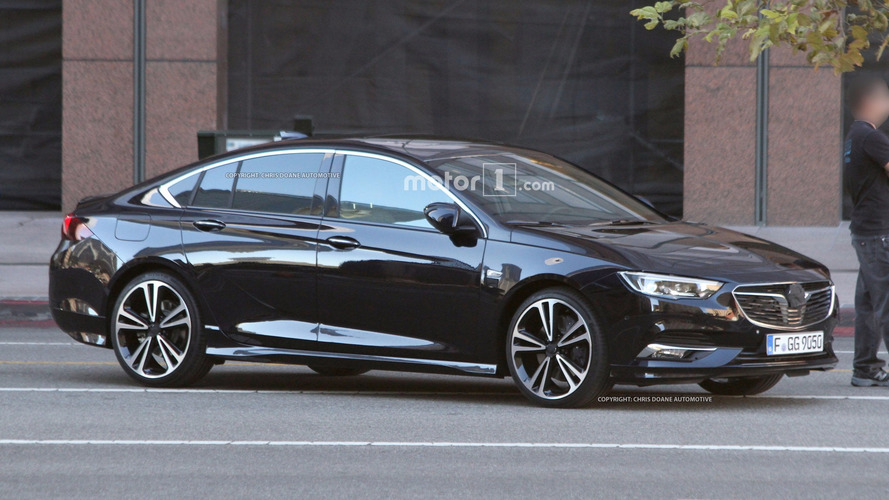 Both are the OPC Line trim and are absolutely gorgeous.

Concepts are usually a sign of things to come, but unfortunately in many cases a production car doesn’t look nearly as exciting as the concept before it. That’s not the situation with the all-new Opel Insignia Grand Sport sedan as it has remained very faithful to the 2013 Monza concept. Seen here is a completely undisguised version of the OPC Line trim featuring a sleek body with a significantly sharper design compared to the aging Insignia.

It’s actually the more appealing OPC Line version bringing a sportier exterior and a lowered suspension setup as well a set of Brembo brakes lurking behind 20-inch alloy wheels. Also noticeable are the dual exhaust tips and a discreet spoiler lip mounted on the trunk. Going against the trend, Opel has not integrated the turn signals into the side mirror caps, deciding to do it the old fashioned way by installing them on the front fenders.

Thankfully, we also have clear spy shots of the Insignia Sports Tourer, which looks absolutely massive and seems to have a cavernous trunk. This one too was an OPC Line version, but instead of the sedan’s round circular tips it had more angular and wider finishers to match the car’s beefier rear end. The wagon’s light blue shade allows us to better see the sporty body kit with the front and rear spoiler lips and the side skirt add-ons.

With both being the top-spec OPC Line, the cars were rocking Opel’s fancy new optional matrix LED headlights with 16 light-emitting diodes in each cluster, which is double than what the Astra has.

Despite being 2.1 inches (55 millimeters) longer than its predecessor, the new Insignia will lose up to 385 pounds (175 kilograms) on select versions. It’s also going to be more comfortable for rear passengers as they will get to enjoy extra legroom as a result of the elongated wheelbase stretching 3.6 inches (92 mm) more than before. One of the reasons why it looks more appealing than the old one is because it will sit 1.1 inches (29 mm) lower, thus lending it a sportier stance.

There’s a good reason why both cars have been spotted in United States as the Opel / Vauxhall Insignias are heading stateside with the Buick badge as the Regal for the 2018MY, according to intel obtained during the Buick-GMC annual dealer meeting from earlier this year. Based on a trademark filing from a year ago, the wagon might receive the “Regal Tourx” moniker. In addition, the new Insignia will also make the trip to Australia where it will become the 2018 Holden Commodore.

Rumor has it the regular Insignia Grand Sport will be unveiled online later this month, ahead of a public debut in March at the Geneva Motor Show. The Sports Tourer should make an appearance several months later.