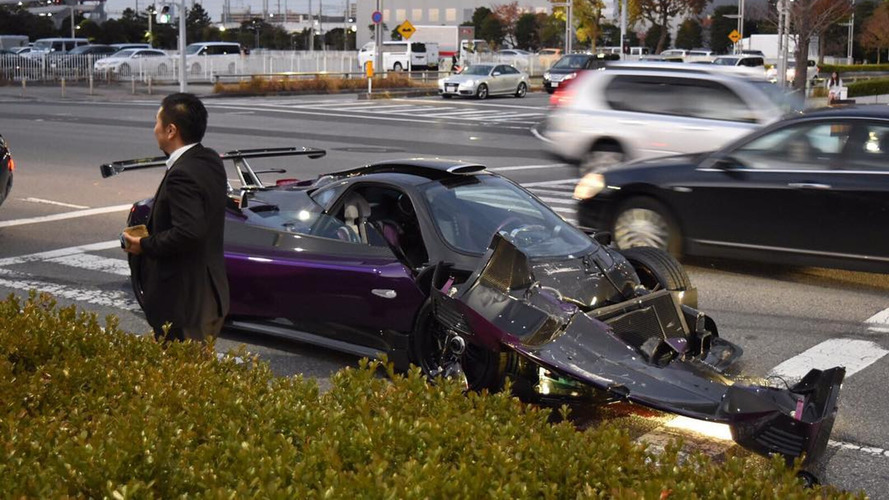 This is a sad way for a special Zonda to go.

The year 2016 has been infamously awful because of the huge number of terrible events over the last 12 months, and things just got even worse for the owner of the one-off Pagani Zonda ZoZo in Japan. The unique super was in a serious crash that ripped the front end off the vehicle’s svelte body.

The cause of the crash isn’t clear at this time, but the Maybach behind the Pagani in some of these photos is allegedly also part of the accident, according to Car Scoops. However, there’s no discernable damage to the ultra-luxury sedan – at least on the parts of it visible in these pictures.

Yusaku Maezawa is the founder of the online shopping site Zozotown, and he commissioned Pagani to build him a unique Zonda. Maezawa took delivery of the ZoZo in 2015. The carbon fiber covers over the rear wheels were the supercar’s most prominent custom flourish. The designers also blacked out the standard taillights and added L-shaped LEDs higher up on the rear. In front, the hood also had unique trim pieces. In its deep shade of purple with exposed carbon fiber as extra accents, Maezawa’s Pagani was certainly eye catching. The 7.3-liter V12 engine provided by AMG produced a plentiful 750 horsepower (559 kilowatts).

The good news for Maezawa is that the ZoZo looks rebuildable because all the visible damage is to the front clip. If the monocoque is still in good shape after a close inspection, then Pagani would just need to supply the replacement piece. The repair is still sure to be quite expensive, but it shouldn’t cost anywhere near as much as commissioning another new Zonda.

Maezawa just posted an Instagram video on November 29 of his Zonda and an Aston Martin One-77 revving. You can see how his supercar is supposed to look in the clip below.