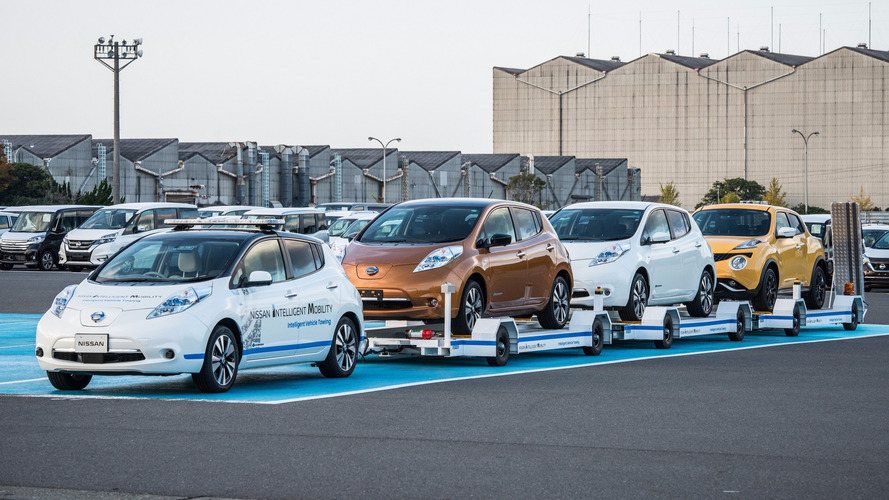 Driverless delivery vehicles have been working in car factories for years. But they are guided by embedded rails or magnetic tape, which is costly to install and restricts the vehicle’s movement. Nissan, though, has come up with a new system dubbed Intelligent Vehicle Transport that seems to solve those problems.

If you’re thinking the IVT system looks a lot like a Nissan Leaf hooked up to a trailer, you’re exactly right. The Leaf in question is outfitted with an array of cameras and sensors that allow it to drive autonomously. And beefed up rear suspension, presumably. Though it still looks rather strained in the images here.

A number of test Leafs are being used at Nissan’s vast production facility in Oppama, Japan to transport finished vehicles from the production line to quayside storage areas - a job usually done by a team of drivers. Up to three cars can be towed at a time to their designated storage area, where a human unloads and parks them.

By cross-referencing data from the sensors with map data, the car knows exactly where it is and where it is going. It stops for hazards, and the system can determine right of way when two IVTs meet. If all else fails, the Leaf can be shut down remotely from the central control room.

Testing has been underway at Oppama for a year or so, the team of IVTs completing over 1,600 test runs in all conditions and at every time of day. Much of the work has gone into developing the safety and fail-safe systems.

Testing will go on while Nissan evaluates whether or not the IVT system can be implemented at its other plants around the world.

Cars That Depreciate The Most
++33