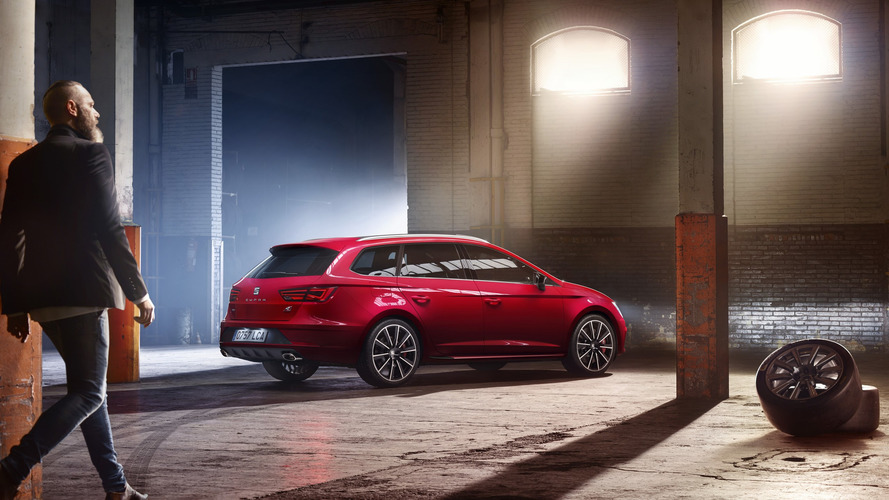 Meet SEAT's most powerful Leon ever.

The rumors were true. Not only is the facelifted Leon Cupra getting an extra 10 horsepower for a total of 300 hp (224 kW), but the ST wagon version will be available with a grippy all-wheel drive arrangement and a dual-clutch gearbox. There’s actually more good news as SEAT’s engineers have dialed the 2.0 TSI to a meaty 380 Newton-meters (280 pound-feet) of torque, which represents a considerable increase of 30 Nm (22 lb-ft) compared to the pre-facelift version. The driver will have access to all that torque in a wide engine speed range of 1,800 rpm to 5,500 rpm.

Unsurprisingly, the styling changes are on a rather very subtle level and are in line with the mild cosmetic revision the lesser Leon models have received. Images of the interior cabin are not available at this point, but we already know it’s getting the same new eight-inch infotainment system and support for wireless charging in the central console.

On the safety side, the 2017 SEAT Leon Cupra facelift will be available with a wide variety of systems, such as Lane Assist, Traffic Jam Assist, Pedestrian Protection, and Adaptive Cruise Control. Not only that, but it’s also getting an electric parking brake and keyless entry with push button start.

As standard, SEAT will sell the revised Leon Cupra with mechanical goodies such as the adaptive chassis control (DCC) and a progressive steering system, while an electronic self-locking differential will also be part of the kit without having to pay more.

SEAT says it will begin customer deliveries of the Leon Cupra facelift in February 2017, with pricing to be announced closer to the model’s launch. As you would imagine, the Leon Cupra ST DSG 4Drive will be the most expensive version of the bunch, but even so it will still undercut the VW Golf R Variant, which is bound to receive a mid-cycle refresh very soon.

Martorell, 05/12/16. – The Leon CUPRA has always stood out for its performance and its extras, logically without forgetting its design and its excellent price/quality ratio. All of these have now been taken a step further, to improve a successful model.

The new SEAT Leon CUPRA can now be ordered and comes loaded with the latest in technology and functionality as with the other models in the new SEAT Leon range. Now, thanks to the inclusion of the most advanced technology in safety, comfort and connectivity, the new Leon CUPRA can offer everything without compromising anything: You will find power, an amazing driving experience and the safest, most reliable, functional and advanced technology. The new Leon CUPRA now features driver assistance systems such as Traffic Jam Assist, Lane Assist, Adaptive Cruise Control and Pedestrian Protection, and additionally comes with Electric Parking Brake and Keyless Entry and Engine Start. The Media System Plus with its true eight-inch screen is the highlight of the new-generation infotainment system, and, is the very first time that the Leon CUPRA has a Connectivity Box in the central console that comprises smartphone wireless charger and a GSM antenna amplifier for areas with low coverage. Deliveries will begin in February.

With its 2.0 TSI engine that puts out 300 horsepower, the new Leon CUPRA is not only a top of the range model, but it´s now also the most powerful model in the series ever produced by SEAT. The figures related to this achievement in engine power deserve a special mention. Not only is the engine 10 horsepower more powerful than before (up from 290 to 300) but more importantly is that the maximum torque has increased from 350 Nm to no less than 380 Nm. This maximum torque is available in an incredibly wide range of revolutions, from 1800 to 5500 rpm. With such a wide range of use, the result is a convincing and powerful response, from the engine barely ticking over all the way up to hitting the rev limiter.

The SEAT Leon CUPRA will also get four wheel drive in the family ST version together with the double-clutch automatic gearbox (DSG). Fans will surely remember that back then in 2000, the first generation of the Leon CUPRA had all-wheel drive too. Now with 4Drive total traction and the latest in driver assist technology, the Leon CUPRA ST DSG 4Drive will be a true exponent in terms of sports vehicles, performance, safety and versatility.

To get the most out of such a brilliant machine, the Leon CUPRA also comes with adaptive chassis control (DCC), progressive steering system and electronic self-locking differential as standard. The dynamic qualities of the CUPRA can be adapted to the drivers’ tastes thanks to the CUPRA Drive Profile. There are five modes to choose from - Comfort, Sport, Eco, Individual and logically, the CUPRA mode. This mode is the ultimate in sports car performance and takes the driving experience to another level.