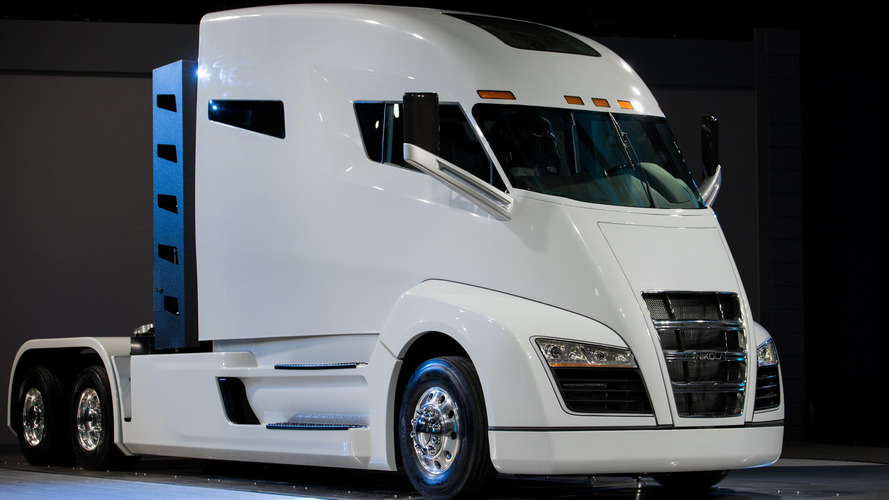 Nikola Motor Company took the wraps off the One semi-truck last night at the company’s headquarters in Salt Lake City, Utah. It aims to revolutionize the trucking business by providing some staggering specifications. With more than 1,000 horsepower and an astonishing torque of 2,000 lb-ft, the numbers really speak for themselves. In addition, range anxiety won’t be much of an issue as the hydrogen-electric truck will be able to cover 800 to 1,200 miles (1,287 to 1,931 kilometers) on a single charge, depending on hydrogen tank and battery specification.

The impressive range will be possible thanks to a huge 320-kWh lithium battery incorporated in the frame rail and set to power the semi-truck’s electric motors, thus making it a zero-emissions vehicle. According to Nikola Motor Company founder and CEO Trevor Milton, the Nikola One will return the equivalent of 15.4 miles per gallon, so it’s going to be roughly twice as efficient as a regular diesel-powered semi and around 2,000 lbs (907 kg) lighter. Filling up the hydrogen tank will be done at one of the 364 stations set to be built starting January 2018 across the U.S. and Canada.

But to actually start production, the company needs a factory. An announcement regarding a $1-billion plant is expected to be made by mid-2017 and once the factory will be operational and in full swing, it will be able to put together 50,000 trucks per year. In order to deliver the first 5,000 units in a timely manner, Nikola will join forces with Fitzgerald. Customer deliveries are scheduled to begin by the end of the decade and the company already has pre-orders of over $4 billion.

A more affordable Nikola Two version (pictured above) is also in the works and both of them are going to be offered with a leasing program. Customers will have to pay between $5,000 and $7,000 (depending on options and trim) per month for 72 months and the plan will include unlimited miles and free hydrogen, also unlimited. In addition, warranty and scheduled maintenance will also be part of the deal. Clients will be able to trade-in the truck for a new one every 72 months / 1,000,000 miles (whichever comes first) without having to pay anything.

Nikola’s busy agenda also includes kicking off sales of its battery packs to OEMs from next year.