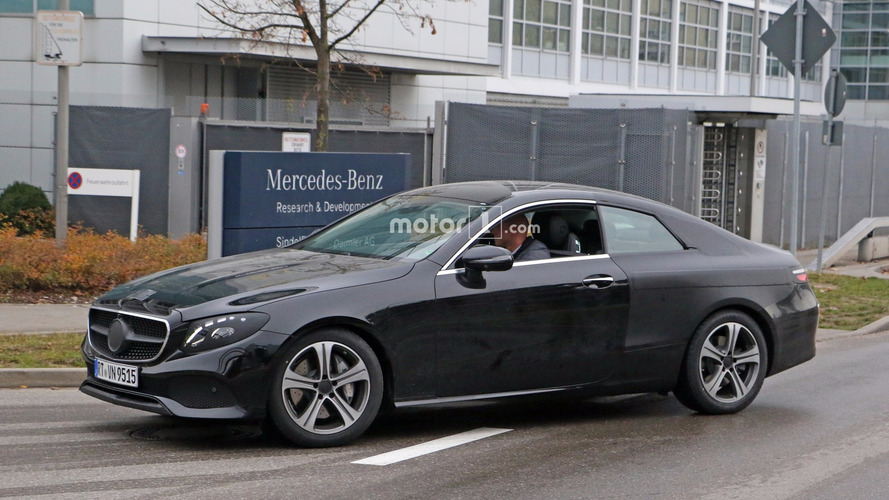 Bearing a striking resemblance to its two brothers, the C- and S-Class Coupes, the new E-Class Coupe was masking its headlights as well as the rear half of the car under a body-colored wrap. Mercedes decided to hide the coupe’s window line aft the doors in a bid to maintain somewhat of a mystery until the car’s full reveal scheduled to take place next month in Detroit at 2017 NAIAS.

While the exterior will be a mixture of the C and S, the interior cabin will have more in common with the latter, as evidenced by the new E-Class Sedan and Estate. No longer will the coupe be based on a stretched platform of the C-Class Coupe like the outgoing car since the new model is getting its own underpinnings from the MFA platform.

Another major plus the next generation is bringing is the availability of a full-on AMG model, although it will probably arrive several months later after the regular version. There are actually going to be two Mercedes-AMG E63 Coupe models, with the standard car packing 563 horsepower (420 kilowatts) and 553 pound-feet of torque (750 Newton meters) whereas the E63 S will have 603 hp (450 kW) and 627 lb-ft (850 Nm). The biturbo 4.0-liter V8 will channel all that power to both axles through a nine-speed automatic transmission, while the E63 Sedan’s Drift Mode should be carried over to effectively transform the high-performance coupe into a RWD car for tail-happy experiences.

Further down the line, an array of brand new silky smooth inline-six engines will likely be added following their introduction next year on the facelifted S-Class. The gasoline unit will have over 408 hp (300 kW) and in excess of 369 lb-ft (500 Nm) while the diesel is going to be rated at 313 hp (230 kW). Keep in mind these numbers are going to be applicable for the revised S-Class, so the E-Class might not get the exact same outputs.