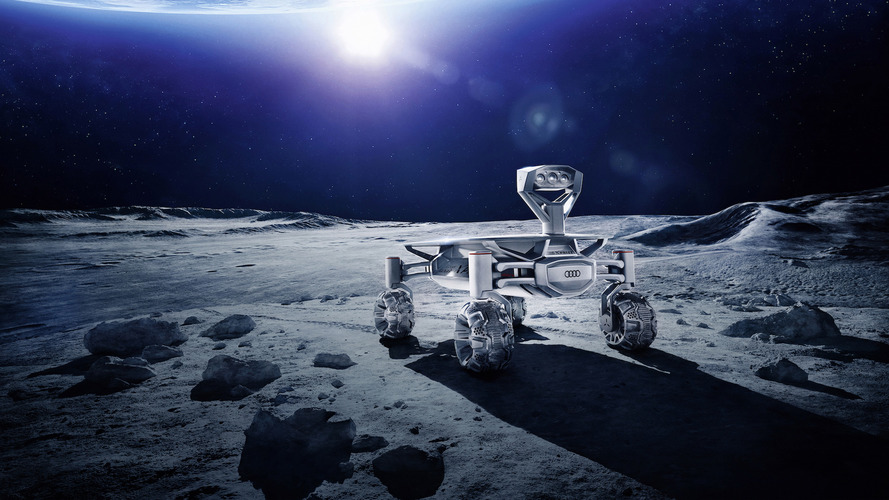 The Audi Quattro rover will blast off towards the end of 2017.

Audi’s lunar rover project seemed like a bit of a pipe dream when it first was announced back in 2015. But lo and behold, together with a German-based group called Part-Time Scientists, the automaker has plans to actually send its Quattro rover to the moon – two of them, in fact.

Developed by a group of 16 Audi experts, the Lunar Quattro weighs in at just 30 kilograms (66 pounds) – eight kilograms (17 pounds) lighter than the original example – thanks to a mix of lightweight materials and the use of aluminum 3D printing. It’s powered by Audi’s signature E-Tron battery technology, and though the company doesn’t give any specifics as to its power and range, it will need all the mileage it can get on the lunar surface.

The goal for Audi is not only to test its automotive components in the most extreme conditions (which it will be doing), but also to take home the $30M prize set forth by Google. The Google Lunar XPRIZE will go to the first team able to land a privately funded lander and rover on the moon, drive the rover 500 meters, and send back photos. A big task for such a small machine.

Together with the team at Part-Time Scientists, the ALINA lunar lander, which has a total transport capacity of about 100 kilograms (220 pounds), will launch towards the end of 2017 with two of the Lunar Quattro rovers affixed. The company responsible for the launch, SpaceFlight Industries, has managed as many as 11 rocket launches in the past with different organizations between 2013 and 2015, including Elon Musk’s SpaceX.

While the design of the Quattro rover is complete, it will still need to undergo some final testing. The dunes of the Middle East will act as a temporary lunar surface before it’s officially ready for its other-worldly travels.

It has shed eight kilograms in weight, while also gaining Audi e-tron power: Following extensive tests the “Audi lunar quattro” rover is ready to tackle one of the most difficult terrains of all in exploring the Moon. As well as the development of the lunar vehicle, the mission has now also achieved a further landmark: The German space travel team “Part-Time Scientists” announced yesterday at Audi City in Berlin that it plans to complete the 385,000 km trip to the Moon from the end of 2017 using a launcher booked with Spaceflight Inc. As an early technology partner and ambassador of the Part-Time Scientists’ mission, Audi has been instrumental in generating extensive publicity for the project and bringing other strong partners on board.

Audi and the German group of engineers announced their partnership in early 2015. Their common objective: to bring together the technological expertise of both partners in getting a rover to travel about on the Moon, under the auspices of the Google Lunar XPRIZE competition. A group of 16 Audi experts has since been supporting the Part-Time Scientists with expertise in a large number of technical areas and has optimized the rover for the lunar mission. Audi was above all able to contribute its quattro experience, knowledge of lightweight construction and expertise in e-tron and design in helping the Berlin team with the development of the unmanned lunar vehicle.

“We are proud that we have given the moon rover important aspects of the four rings’ DNA: It is a quattro, has an e-tron battery on board, drives in piloted mode and offers an intelligent mix of materials,” remarked Michael Schöffmann, Head of Audi Transmission Development and Development Coordinator of the Audi lunar quattro. “The collaboration with the Part-Time scientists is also very enriching for us: We are breaking new technological ground with the Audi lunar quattro and can learn much about how automotive components behave in extreme conditions.”

Over the past few months Audi’s experts have been working on the rover’s intelligent all-wheel-drive power distribution, optimizing its high-performance electronics and contributing their piloted driving expertise to the development process. In order to boost stability and increase the contact surface, the engineers and designers enlarged the rover and its wheels. Meanwhile they reduced its weight from 38 to 30 kilograms by adopting an optimum mix of materials and using aluminum 3D printing. Sophisticated tests, for instance in the Audi sun simulation chamber, were also run to simulate the extreme conditions on the Moon and examine the suitability of the rover’s components.

On the Moon, the Audi lunar quattro will have four cameras to help it find its way around. It will use them to examine objects and take 3D and 360°pictures. One popular motif will be the rover from the Apollo 17 mission, which still stands in the Valley of Taurus-Littrow. ALINA, the landing module of the Part-Time Scientists, will touch down close to the 1972 landing point with two Audi lunar quattro vehicles on board. The probe will travel to the Moon on a launcher such as a Falcon 9 and has a total transport capacity of 100 kilograms. As well as the two rovers, the Part-Time Scientists will therefore also be able to take research equipment to the Moon for other partners. In this context, project partners such as the U.S. space agency NASA, the European Space Agency ESA and Wikipedia were recruited because of their substantial scientific interest in the mission.

The Part-Time Scientists plan to set off for the Moon from late 2017. Before then, they will still need to conduct extensive stress testing of the two Audi lunar quattro vehicles and the landing probe. To that end the team will be simulating the entire mission in the Middle East over the next few months, and is now performing some final fine-tuning.

The Part-Time Scientists came together in late 2008 on the initiative of IT expert Robert Böhme and are based in Berlin. They now number 35 engineers on three continents. Working together with international space experts, their aim is to make the lunar mission become a reality and gather as much knowledge as possible to promote technological development and advance scientific progress.

The Google Lunar XPRIZE, worth more than USD 30 million, is a space travel competition aimed at engineers and entrepreneurs from all over the world. To win, a private team must get a rover on the moon, drive it at least 500 meters and send high-resolution pictures back to earth. From an original field of almost 30 challengers, there now remain five leading teams in the race to head off for the moon. The Part-Time Scientists are the only team from Germany.