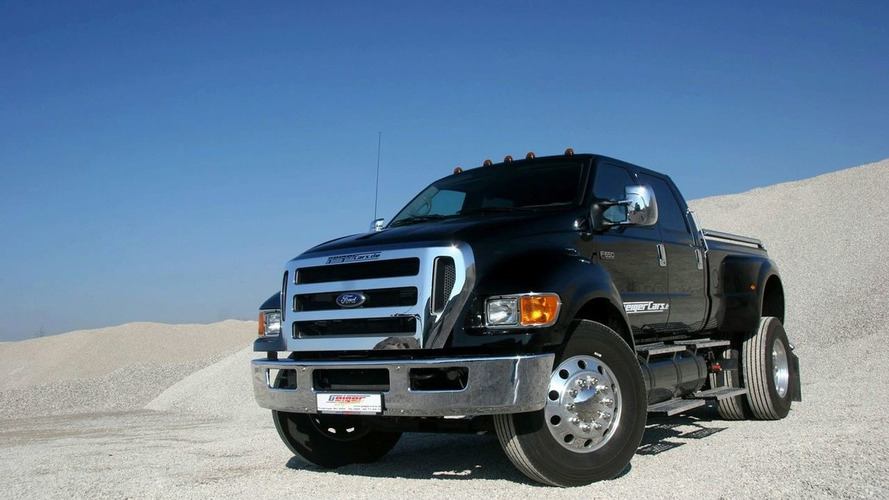 German tuner Geiger Cars has imported the huge Ford F650, dressed it up a bit and tuned it to torque of 737.6 lb-ft.

Geiger Cars, run under the sharp tutelage of Karl Geiger, is well known for its imported American cars that it tunes to customer satisfaction. All the way in Munich, Germany. Geiger has now imported the massive F650, presumably by ship via the Atlantic, for tuning. The vehicle’s proportions are simply incomparable. When we first spotted the big blob of Ford metal at the 2006 Detroit Motor Show we knew somewhere somehow would find it the most interesting thing since the model T Ford. Indeed.

Measuring some 21.3 feet (6.5 metres) in length and weighing 5.2 tonnes of curb weight on the scales, the F650 needs a truck driver’s license to drive. Comparisons have been made, by Geiger, to vehicles like the HUMMER H2 which sadly falls short on the size front.

The engine itself is a diesel motor, covering some 6.7-litres. The 320 bhp will hardly scare away anything in this day and age, especially if it’s 320 horses expected to run more than 5 tonnes of steel. You are better off racing a train. However. Here’s the thing. F650 from Geiger isn’t too interested in kiloWatts anyway since a truck’s main function in life is to haul cargo, dead or alive. What matters in this league are Newton metres or pounds in feet as it were, where we count 737.6 lb-ft of them. All from this six cylinder unit! Only the likes of Mercedes-Benz 65 AMG and Audi V12 TDI engines make such numbers. The vehicle is driven by a 6-speed automatic gearbox.

Get this. You can customize your vehicle to your best liking with things like gullwing doors, leather interior and navigation entertainment systems.